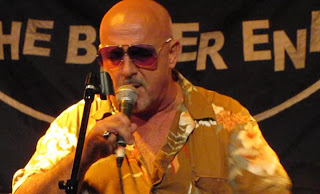 This is the second in a series of videos recorded at The Bitter End All Star Jam during August 2010.

The Bitter End (at 147, Bleecker Street, New York, New York) is one of the few Greenwich Village venues that have survived from the heyday of the exciting music scene that characterized 1960s New York City. Especially among those venues that promoted folk musicians in particular.

The song featured here is the old classic Money. The singer is Don Cazio, a Bitter End regular, and a musician and singer in his own right. Mark Greenberg (drums), Brett Bass (bass), Danny Thompson (wearing the hat) and Benny Landa both swap lead breaks on electric guitars.

I have been to The Bitter End numerous times on both my visits to New York City, and each time I have been amazed by the lineup of talent that is presented there. As you might imagine, New York has musicians and singers to spare, and many of the best of these are on show at the All Star Jam.

The Bitter End All Star Jam Band performs from 10pm until late, on the second and fourth Sunday of every month). There is also a regular Monday night jam with Richie Cannata.


Visit The Bitter End Jam website…
And since you are online anyway, check out their MySpace page…