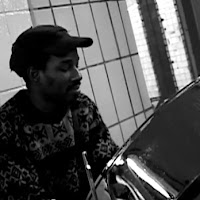 One of the many things I love about New York City is the range of amazing musicians and singers who eke out a living performing across the city’s subway network. Actually, ‘eke out’ may be the wrong expression. Judging by the amount of money some of these musicians are able to earn in tips (based on my observations), they may in fact be making quite a good living.

Of course, this only applies to the best of the performers, but then to survive as a performer on New York’s subway stations you have to be more than good, you have to be very good. So today, I thought I’d feature some short films that focus on a few of these subway singers.

The first film was uploaded to YouTube by a person using the pseudonym/profile name: mybs86. Regarding the video s/he writes:


"okay- what you are about to watch is a true new york experience. what originally started out as a typical nyc subway ride (sitting across from guy who smelled like urine) turned into an awesome performance by two people who have never met before. i captured the whole thing on video. the singer continued with another great song after the entire subway car demanded an encore. her name is jessica latshaw- make sure to check out her music."

Whether the meeting of musicians was a set up or not is immaterial. It’s a great clip, and Jessica exudes confidence and charisma by the bucket full. Jessica Latshaw has her own Facebook profile [https://www.facebook.com/jesslatshaw], so if you feel so inclined – get in touch and become a Friend/Follower.

Thanks to Gothamist for bringing the Jessica Latshaw video to our attention.

Below New York
Below New York is the name of a documentary for CamLin Productions, whose first feature “…is a unique and stylized look at some of New York City's finest subway performers, musicians and artists. The film draws the audience into the amazing lives these local performers lead, and how their quest for a venue and sustenance adds a truly wonderful aesthetic to one of the greatest cities in the world.”


Below New York – Select Blendz
One of the groups featured in the Below New York documentary is Select Blendz, an (almost) a’ Capella group that clearly has the doo-wop thing down pat. I say ‘almost’ because they do include an upright bass player in their lineup. This second clip from CamLin Productions showcases the group on an unnamed New York subway station.