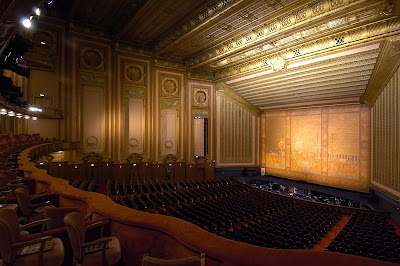 ~ Frommer's asked the editors of OPERA NEWS magazine, whose European Travel issue hits newsstands mid-April, to come up with the top 10 destinations that should be included on every opera lover's roadmap this year.

I listed the first five (in no particular order), in an earlier posting on this blog.

Here are the last five top destinations for lovers of opera.

FRANCE: Paris
Has any place inspired more operas than Paris, perhaps the most romantic city on earth? Paris's newest home for opera is the spacious but somewhat chilly Opéra de la Bastille, which boasts an unrestricted view of the stage from each of its 2,700 seats, but the city's most famous operatic landmark remains the opulent nineteenth-century Palais Garnier, familiar to lovers of Broadway's Phantom of the Opera. Don't miss a chance to visit Théâtre des Champs-Élysées, an Art Deco masterpiece that is one of Europe's prettiest theaters, or the devastatingly elegant Théatre du Châtelet. Also worth a trip is the Salle Favart, its frothy good looks an apt metaphor for the light-hearted attractions of its home company, the Opéra-Comique.

THE UNITED STATES: Civic Opera House, Chicago
Chicago's Civic Opera House is one of the most beautiful buildings in a city that prides itself on its architecture. Built in 1929, this ageless amalgam of Renaissance revival and Art Deco has superb acoustics, excellent sightlines and sumptuous public spaces, including a handsomely proportioned lobby designed by Jules Guerin. The theatre was home to several Chicago opera companies before its most distinguished tenant, the Lyric Opera of Chicago, arrived in 1954. The Lyric established the City of Big Shoulders as an international opera capital, offering the opera world's brightest stars in top-notch productions. After the Lyric season ends in late winter, Chicago's opera lovers hold on until spring, when the adventurous Chicago Opera Theatre presents its three-opera season at the slick new Harris Theatre for Music and Dance in Millennium Park.

SWEDEN: The Drottningholm Court Theatre
Built in 1766 for the Swedish queen, Lovisa Ulrika, the Drottningholm Court Theatre-located in the Royal Domain of Drottningholm, only a short bus or boat ride from the capital city of Stockhom-is a thing of exquisite artifice. The theatre was a beehive of musical and theatrical activity during the late eighteenth century, but when Lovisa Ulrika's son (and political enemy), King Gustaf III was assassinated-an event used as the basis for Verdi's opera Un Ballo in Maschera,-the theatre fell into disuse; it was a storage facility for much of the nineteenth century. Drottningholm was recalled to life in the 1920s and now presents a brief summer season each year, with the repertory usually drawn from the seventeenth and eighteenth centuries. Spring and summer tours of the theatre and the palace grounds are relatively infrequent, in order to spare its eighteenth-century charms from the wear-and-tear of twenty-first-century life. Early booking is advisable.

THE UNITED STATES: Santa Fe Opera
In 1957, New York conductor John Crosby started an opera company in a highly unlikely locale: the breathtaking mountains of northern New Mexico. Crosby's impossible dream has endured: every July and August since then, Santa Fe Opera has presented an imaginative, exciting mix of familiar classics, rarely-performed treasures and brand-new works, their casts generally populated by the best young singers in America. Opera lovers from all over the world have been thrilled by Santa Fe's singular natural beauty, an element in the company's appeal celebrated by its dramatically proportioned adobe theatre, which has unequalled views of the high desert landscape - and the heart-stopping beauty of its sunsets. Daytime hours in Santa Fe can be spent sampling the myriad charms of the city itself and of its thriving local community of world-class artists and artisans.

ENGLAND: Glyndebourne Festival Opera, Sussex
The thoroughly English character of Glyndebourne Festival Opera reflects the personality of its eccentric founder, John Christie, who developed the ambitious scheme to offer festival-quality opera performances on his East Sussex estate beginning in 1934. Christie's original theatre was eventually replaced by a completely new facility in 1994, but the abiding presence of the Christie home and the continued involvement of Christie's descendants in festival life have allowed Glyndebourne to retain much of its original atmosphere. The operas of Mozart have been at the core of Glyndebourne's repertory for all of its existence, but more esoteric fare - including some world premieres - is also among the company specialties.

About Frommer's
The market leader in travel guides, Frommer's has a guide for every type of traveler-from the sophisticated world traveler to the first-time student traveler on a tight budget. Frommer's publishes more than 300 guides and sells 2.5 million guides annually, reaching 7 million travellers who count on Frommer's for exact prices, savvy trip-planning, sightseeing advice, dozens of detailed maps, and candid reviews of hotels and restaurants in every price range. Frommer's-the best trips start here. Frommers.com is a comprehensive, opinionated travel resource featuring more than 3,500 world destinations.