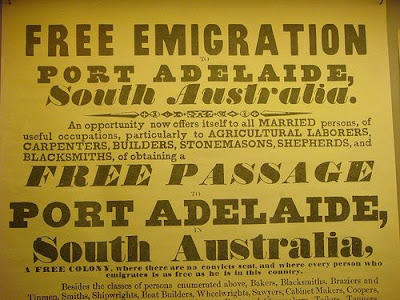 ~ The National Migration Museum, Adelaide tells a story of the state of South Australia and the people who migrated to it over many years.

It is the story of their courage and heartbreak, their struggles and successes, all brought to life through an ever changing interactive series of displays documenting the states unique cultural heritage.

By showcasing the objects that shaped the lives of the early settlers; possessions, official documents, family heirlooms, and other everyday objects, visitors get a powerful insight into the waves of immigration across the decades.

A visit to the Migration Museum lets you experience the rich blend of cultural diversity that makes up South Australia while you learn about people from different backgrounds, ages and experiences who have together shaped our identity.

Through sight and sound, the journey unfolds to reveal: early settlers in the 19th century and their impact on Aboriginal Australians; post-war migrants and the ‘ten pound Poms’; the White Australia Policy of the 20th century; and refugees, asylum seekers, and the multicultural debate of recent years.

While there, visit the Museum’s special gallery, The Forum, where community groups have an opportunity to present their own personal stories in their own way.

The Migration Museum has its own unique history, that is worth retelling.

It used to be part of Adelaide’s Destitute Asylum housing the poor and homeless from 1852 until 1918. Today, a permanent display called Behind The Wall tells this often tragic story.

Finally, a Memorial Wall acknowledges the many people who were forced to leave their homelands, and seek refuge in Australia, while a Reconciliation Plaque is dedicated to the Kaurna people (pron: Gar-na), the first inhabitants of the Adelaide plains.

Selling an American Dream: Australia's Greek Café is a photographic exhibition now on at the Migration Museum.

Every time you drink a Coke, enjoy an ice cream or sweet chocolate treat, go to the cinema, or listen to the latest popular music hit, you can thank Australia's Greek settlers.

Greek cafés in Australia were a Trojan horse for the Americanisation of this nation's eating and socio-cultural habits from the very start of the twentieth century. They initially introduced American commercial food catering ideas, technology and products and later influenced the development of cinema and popular music.

The Greek café helped transform Australian popular culture. This exhibition not only looks at how this was done, but also the personal stories of those involved.