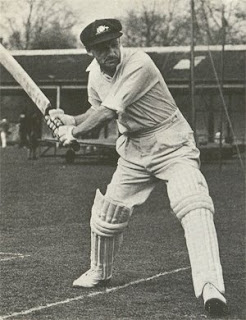 ~ Sir Donald Bradman
Australia’s greatest cricketer and the world’s greatest batsman begins when Donald George Bradman is born in Cootamundra, New South Wales in 1908. It follows with him growing up in Bowral and moving to Sydney at the age of 18 where he represented his state the following year and then Australia at the age of 20.

He moved again to South Australia in 1934 to further his business and cricket opportunities and remained here until his death in 2001.

The Bradman Collection Museum follows his progress from club cricketer on to the interstate and international stage. It notes his rise to hero status in the 1930s and how that status has been maintained. It explores his major role in cricket administration and provides glimpses of the family man and all-round sportsman.

The History Of Bradman Collection
In the late 1960s Sir Donald Bradman was persuaded to place much of his personal material in the State Library of South Australia. Fifty-two scrapbooks documenting his playing career were organised by library staff over several years as photographs, menus, newspaper cuttings and telegrams were copied and mounted in chronological order. In return Sir Donald donated a significant number of personal items of memorabilia to the library including various bats, balls, trophies, clothing and other pieces which became known as the Bradman Collection.

Some were originally displayed at the Mortlock Library of South Australia from 1986 before a larger selection of pieces was moved to a permanent exhibition site in the library’s Institute Building in 1998. It was originally Sir Donald’s wish that a home for the collection might one day be found at Adelaide Oval and this took place in August, 2008 to coincide with the centenary of his birth.

The South Australian Cricket Association is now the custodian of the collection in conjunction with the Premier’s Department, State Library and the Bradman Family. The State Library retains the archival materials and management of the Bradman Collection website.

The Bradman Collection Museum
The museum, now housed at Adelaide Oval, is built around various periods of Bradman's life and career, including his career as a cricketer at Club, State and International level.

In the Theatrette visitors can watch key film footage of Bradman’s career including a lesson from the master on playing different strokes. Other artefacts include books by and about Bradman, some of the thousands of letters from fans from all over the world; an interactive display, and a reconstructed lounge room depicting how listeners in Australia would have sat around their radios listening to Bradman playing thousands of miles away in the 1930s.