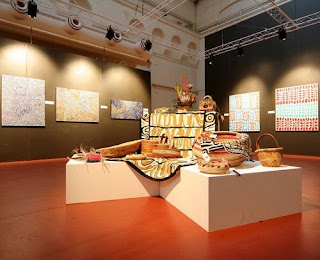 ~ Kaurna people and Kaurna land
The Kaurna people (pronounced, Garna) are the traditional Aboriginal owners of the area now called, Adelaide. Kaurna land stretches along a narrow corridor across 29 council areas from Cape Jervis in the south, to Broughton in the north.

The Adelaide City Council works closely with the Kaurna people on specific initiatives that include giving all 29 parks around Adelaide Kaurna names, and assigning dual names to prominent sites around the city. For example, Victoria Square, in the heart of the city is also called Tarndanyangga, an Aboriginal name meaning a place of the Red Kangaroo Dreaming. The River Torrens has the dual name, Karrawirra Parri, or red gum forest river, in the Kaurna language.

There are several locations that should be on everyone’s itinerary if they are at all interested in Aboriginal culture. These attractions and their locations are detailed in the rest of this feature .

Tandanya is a visionary and vibrant place to explore and experience contemporary and traditional Aboriginal and Torres Strait Islander culture. The centre features an ongoing performing and visual arts program, exhibitions, tours, a cultural presentations and performances.

The SA Museum is open daily from 10am to 5pm
(except Good Friday and Christmas Day)
Entry: Free
Location: North Terrace, Adelaide