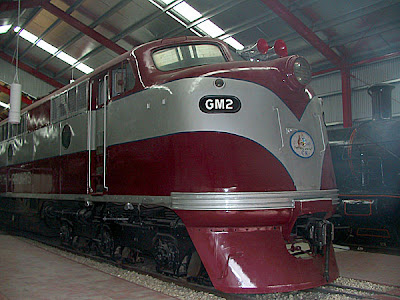 ~ The National Railway Museum provides affordable family entertainment on two sites: at Lipson Street, Port Adelaide, and on the foreshore at Semaphore.

The Museum is a self-supporting, non-profit enterprise which occasionally receives government grants for special projects. Apart from the duties of two paid staff members, all of its activities are conducted by volunteers.

The Museum is Australia's largest railway museum with over 100 exhibits representing state, Commonwealth and private railway operators on the three major rail gauges used in Australia.

At the Railway Museum you can climb into the cabs of giant steam engines, walk through elegant carriages, and enjoy a free train ride. New displays include the Man In Blue and the Adelaide Railway Station Indicator Board. There is also a new interactive interpretive tour of the famous Tea and Sugar Train (see side bar for more information). Learn about the role of women in railways; trace railway development on the interactive map, and read about the famous Overland sleeping car train that operated for many years between Adelaide and Melbourne.

The National Railway Museum provides more than exhibits. Function and reception facilities cater for corporate events and dinners seating up to 600. The Museum is also a popular location for weddings, social club events, and trade shows, where as an added bonus, guests are able to wander through the exhibits and displays. In fact, trains can even be arranged to transport groups from Adelaide right into the Museum for major functions. More intimate celebrations are catered for in the historic Ghan dining and lounge cars. Finally, children’s parties are a special treat in the Cafeteria Car. Children of course, will love the huge working model railway system at the Museum too.

The Semaphore and Fort Glanville Tourist Railway operates daily from 11am during school holidays, and every weekend and public holiday from September to May.

The mini steam train follows a two kilometre ride along the dunes from Semaphore Jetty to Point Malcolm and return.

Getting There:
From the Museum: Bus 333 from Commercial Road, Port Adelaide (stops corner Military Road/Semaphore Road).
Posted by Jim Lesses at 10:43 PM