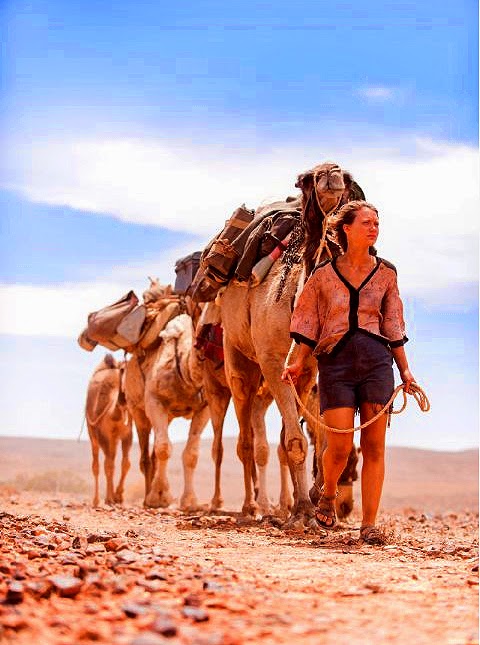 So there I was at 10:32 am, sitting in theatre 13 at my local Megaplex waiting for the 10:15 am start of Dallas Buyers Club, and wondering why it had yet to begin. Finally, at 10:40 the lights dim and the pre-show adverts and previews begin. Another ten minutes and ... Tracks, the new Australian movie unfolds on the big screen.


Dammit, I'm in the wrong theatre!


Since it is far too late to find the right screen I figure one film is as good as the next. As disappointed as I was to miss Dallas Buyers Club, I am delighted that I got to see Tracks, a movie I really enjoyed.


Filmed mostly in outback South Australia (my home state), and the Northern Territory, the movie recounts the 1977 trek Robyn Davidson made across 1700 miles of Australian desert. The trek became the cover story for the May 1978 edition of National Geographic magazine, and subsequently the story of her journey was recounted in her best selling book, Tracks, published in 1980.


I’ve never read Davidson’s book, so I can only assume this film is as true to her story as modern movies are capable of depicting it―short of her story being retold in documentary form.


Robyn Davidson was born on a cattle station in Queensland. Tragically, her mother committed suicide when Davidson was 11, and she was largely raised by her father's unmarried sister. She went to a girls' boarding school in Brisbane, where she received a music scholarship but did not take it up. Elements of her background are recounted in the film in the form of flashbacks.


In the 1970s, Davidson moved to Alice Springs where she trained camels for two years, and learned how to survive in the Australian desert. All this was in preparation for the journey across Australia she was then planning. This period of her life is depicted during the first third of the film.


In 1977, Davidson set off from Alice Springs for the west coast, with a dog and four camels. Apparently, she had no intention of writing about the journey but eventually agreed to write an article for National Geographic Magazine. The American photographer, Rick Smolan (with whom Davidson had an “on-again, off-again” relationship during the trip), became the official photographer for the journey. However, Smolan did not travel with Davidson, but instead arranged to meet her at designated points along the way during her nine-month trek.

There is much to like about Tracks, not the least of which is the stunning Australian landscape. Mia Wasikowska, as Robyn Davidson, is often dwarfed by her three adult camels, and all in turn, are dwarfed by the vast desert locations that form a vital part of this incredible story. As a backdrop, the Australian outback, as depicted in the film is immense, hot, and unforgiving, especially to those who venture out into it uninformed and unprepared. Clearly, Davidson had done her ‘homework’, and was as well prepared as she could have been, given the amount of time she devoted to working with camels and learning to live in that harsh environment before starting out.


Apart from the small number of profession actors in Tracks, the film makes generous use of numerous non professional actors, particularly members of local Aboriginal communities. This gives a sense of authenticity to the film, especially with the introduction of Roly Minuma as Mr. Eddie, an Aboriginal elder who escorts Davidson through territory containing sacred sites that are normally off limits to women. Mr. Eddie also imparts important cultural information during the shared part of their journey.


Since the early 1980s, there have been at least five attempts to turn Robyn Davidson’s book into a film. Among the actors mooted to play the lead role have been Julia Roberts and Cate Blanchett. The idea that Julia Roberts might have been required to adopt an Australian accent for the film makes me shudder just thinking about it. Cate Blanchett on the other hand seems just a bit too elegant and sophisticated to fill the role. But maybe I am being too harsh.


Mia Wasikowska on the other hand, brings a certain vulnerability to the role, which I think it calls for. Cleary, Davidson’s journey from the centre of Australia to the Western Australian coast must have taken enormous amounts of courage and resourcefulness. Yet as depicted in the film, she also had to deal with many moments of doubt, loneliness, and sadness, and Wasikowska portrays all that and more.


While there are a couple of scenes in Tracks which didn’t quite ring true, I can only hope they did in fact occur during Davidson’s trek. It would be a shame to find that the scenes were introduced into the film simply to add some drama to a story that surely must have had more than enough moments of genuine drama to fill 100 minutes or so.


I kept hoping and waiting for a great ‘Lawrence of Arabia’ moment in Tracks. That is, something inspired by the scene in David Lean’s movie when Omar Sharif, as the character Sharif Ali appears out of a desert mirage in a beautiful long shot that has become a classic of modern cinema.

There were several moments in Tracks when I thought the audience was about to be treated to a similar scene, but numerous edits and close ups destroyed the effect. Maybe the director John Curran, and editor Alexandre de Franceschi wanted to steer clear of such a moment to avoid charges of plagiarism. If so, that’s a pity. I myself would have regarded it as a tribute to David Lean, but then, I was neither director nor editor.


In the trailer below you can catch a very quick glimpse of one of these scenes at the 1:36 minute mark.


This is definitely a film worth looking out for when it comes to a cinema near you. But for goodness' sake―make sure you walk into the right theatre!