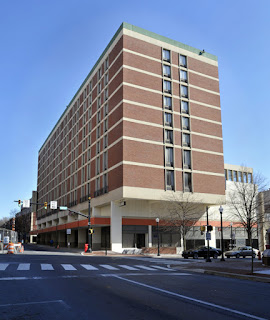 Updated April 2016. Please note, this review refers to the former Hotel Brunswick in Lancaster, Pennsylvania, and in no way reflects or refers to the new Hotel Lancaster which today occupies the same building. At the end of this review I wrote, "... the current owners/managers must pay more attention to details, and push staff to provide a better, friendlier service - and they need to do it soon, or the hotel may continue its decline beyond the point of no return."

That 'point of no return' occurred in late 2013, when the hotel was closed down and taken over by new owners who have refurbished the building and rebadged it as the Hotel Lancaster. The transformation from the old rundown hotel into an updated and renamed hotel seems to have given the building a completely new 'lease of life', so much so that the reviews on TripAdvisor and other sites are today overwhelmingly positive, whereas once they were almost all negative. I was tempted to delete this post, but have decided to keep it for historical purposes.
- o0o -

The Hotel Brunswick in Lancaster, Pennsylvania promotes itself as “A full service hotel with a three-star rating to accommodate all your needs while travelling. We boast 221 spacious rooms and over 12,000 sq. feet of meeting and banquet space for conventions and family gatherings.”

I like to make a point of being as honest and as positive as possible with my reviews, but quite frankly I had to work hard to be positive reviewing the Brunswick. The hotel website is full of beautifully presented images that do not always reflect what I saw during my five night stay during August 2012. In fact, on initially viewing the website I thought I was looking at a completely different hotel.

An image on the hotel website shows a group of uniformed, smiling staff who look like they are bursting with energy and enthusiasm, and who want nothing more than to please hotel guests. I suspect this is a stock photo image, or at best reflects much better days for the hotel. I saw no uniformed staff during my stay, and while the few staff I did see carried out their duties well enough, reception staff came across as mostly bored and indifferent. However, my stay was not a disaster by any means, and I even extended my initial three night stay by an extra two nights.

LOCATION: The Hotel Brunswick is located in the heart of historic downtown Lancaster. Within walking distance of the hotel are many restaurants, the city’s famous Central Market, Fulton Opera House and numerous shops and art galleries. The hotel is also directly opposite the local bus station which is perfect for travellers (like myself) who don't have their own transport. Note: the Greyhound/Amtrak terminal is about 3/4 of a mile away at the end of North Queen Street. For those visitors with their own vehicles, a privately run parking garage is located right next to the Hotel Brunswick. Separate fees apply when using this facility.

FACILITIES: Room 912 had everything most travellers would expect to find in a typical hotel room and while I have no complaints about the size of the room or its amenities, it was immediately obvious on entering (judging by the bits of paper and other detritus on the floor), that the carpet had not been vacuumed for what seemed like several days.

Other facilities listed on the hotel website include:
Free Wireless Internet service [which worked fine for my purposes]
Cable TV and Showtime Channels [umm, can’t remember much about these]
Voice Mail [if it was available, I never used it]
Coffee Maker, Ironing Board/Iron, and Hair Dryer [yes]
Individual Climate Control [yes, if they mean the ability to adjust the air-con yourself. In fact, the air-con unit in my room was so efficient that I had to turn the temperature up to warm the room. And this was during August.]

BREAKFAST: Breakfast was passable (two cereals, bread for toast, frozen waffles, mini-muffins, coffee, apple and orange juice, etc.), but the service was very poor. Sometimes there were not enough plates, and at other times, no napkins, or the coffee had run out. To cap it all off, no one appeared responsible for cleaning tables after they had been vacated, which often meant tables were smeared with jelly and butter, or covered with food crumbs of one type or other.

GENERAL IMPRESSIONS: According to the ‘History’ section of the hotel’s website, “The property operated under the “Hotel Brunswick” name until June of 2001 when it acquired the “Ramada” flag and was named the “Ramada Inn Brunswick Conference Center.” In February of 2005 the hotel was purchased out of bankruptcy [my emphasis] by a California based company and the “Ramada Flag” was removed. The hotel owners decided to keep the historic name of “HOTEL BRUNSWICK.”

Clearly, the hotel has seen better times, and even though it apparently underwent some renovations a couple of years ago, it looks like it has never quite recovered from the financial crisis that hit in 2010. It is possible that renovations are still taking place at the hotel, albeit very slowly, which might account for the very divergent reviews for the Brunswick that can be found on TripAdvisor and other websites. The website advertises an on-site restaurant but it was not operating during my stay, and I would venture to say that the restaurant has not operated there for quite some time, although the dining area was being used as the breakfast space.

I checked the hotel website while writing this entry. Under the ‘Dining’ tab, the site states clearly that, "Our restaurant & lounge are temporarily closed.” However, under the ‘Guest Rooms’ section of the website, I found this: “The Hotel Brunswick offers an on-site restaurant and versatile meeting rooms.” I can’t vouch for the meeting rooms, but I am prepared to guess that the restaurant and lounge are still closed. It seems little has changed in that respect in the ten months since my stay.

Despite everything I have written, the Brunswick was not the dump some reviewers seem to think it is. Yes, the escalators leading to the reception area were not working while I was there (and still appear to be out of order), however the lifts were and still are operational.

The excellent location and the great price make the Brunswick a perfect place from which to explore the city of Lancaster and the surrounding Amish country. However, the current owners/managers must pay more attention to details, and push staff to provide a better, friendlier service - and they need to do it soon, or the hotel may continue its decline beyond the point of no return.

Here is a short video I put together from footage recorded just after my arrival in room 912: