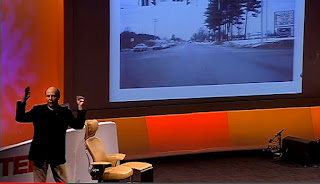 James Howard Kunstler is an American author, social critic, public speaker, and blogger. He is best known for his books The Geography of Nowhere: The Rise and Decline of America's Man-Made Landscape, a history of American suburbia and urban development, and the more recent The Long Emergency: Surviving the End of Oil, Climate Change, and Other Converging Catastrophes. In the latter book he argues that declining oil production is likely to result in the end of industrialized society as we know it and force Americans to live in smaller-scale, localized, agrarian (or semi-agrarian) communities.

Kunstler doesn’t hold back as he unloads on both these themes in this very entertaining but important TED talk, which he delivered in 2007. Kunstler also believes that public spaces should be inspired centres of civic life, and the physical manifestation of the common good. Unfortunately, America, he argues, is in danger of becoming a nation of places not worth caring about.

James Howard Kunstler calls suburban sprawl “the greatest misallocation of resources the world has ever known,” and his arguments focus directly on urban development, drawing clear connections between physical spaces and cultural vitality. His confrontational approach and propensity for doomsday scenarios make Kunstler a lightning rod for controversy and critics. But his magnificent rants are underscored with logic and his books are widely read, particularly by architectural critics and urban planners.

“The upside of Kunstler's anger is that he's getting people to sit up and take notice.”
~ Outside magazine

Note: This talk contains numerous ‘F’ bombs, so if you are offended by coarse language you may want to skip this weeks TED on Tuesday.