Armchair Travel: Venice In A Day 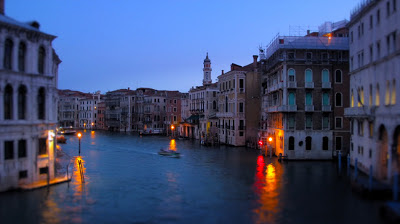 Joerg Niggli's creative interests include producing time-lapse movies using his own video footage and photographs. The films on his Vimeo page provide stunning images of Jordan via his videos of Amman, Petra, and Wadi Rum, while other videos include a hot air balloon flight over the Swiss and French Alps, and today's Armchair Travel video documenting a day in Venice, Italy.

Venice is one of the most interesting and lovely places in the world. Visitors with a special interest in architecture will find much to delight and occupy them, with a seemingly endless array of stunning architecturally significant buildings on every narrow street or facing the many canals that make Venice such a special experience. The city is virtually the same as it was six hundred years ago, which adds to its fascinating character, and although Venice has decayed since its heyday, the city's romantic charm remains to fascinate and seduce millions of annual visitors.

The Republic of Venice dates back to 827, when a Byzantine Duke moved to what is now known as the Rialto, and for the following 970 years, the city prospered as a centre for trade under the rule of a Roman-style Senate headed by the Doge. In 1797, the city was conquered by Napoleon, a blow from which it never fully recovered. Today, Venice remains a monument to the glory days of the Renaissance, and Joerg Niggli has captured the city’s charm, beauty, and stunning buildings magnificently in his short film.

Joerg writes, “A day in Venice (Venezia) in Italy, from daybreak to sunset in time lapse. It's really a great place and I hope I can share some of its magic with this short video.” Rest assured Joerg, you have.

Venice in a Day from Joerg Niggli on Vimeo.

The video was part of the selection of Artfutura 2012 and will be shown in large cities around the world.

Music: «Heart of Champions», Chris Haigh, with a licence from premiumbeat.com.

Joerg Niggli adds that the video was recorded mostly using a Canon G10, with some wide angle shots taken with a Canon 7D. Post production was completed in Motion, After Effects, and edited and graded in Final Cut Pro X.