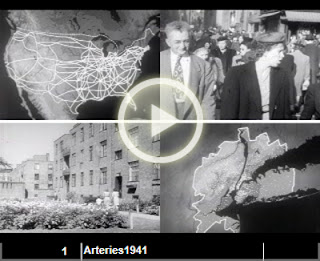 Check out this short film produced by Encyclopaedia Britannica Films during the 1940s.
The film shows transportation corridors into and out of New York City, using animated diagrams indicating directions of flow for trains, ferries, highways, tunnels, subways, buses, etc. It provides a unique view, not just of transportation in 1940s New York, but some great aerial footage of the Big Apple before the start of the post-war rise of the modern skyscraper.

There are also scenes of a very crowded Coney Island boardwalk, apartment houses and suburbs, Times Square, the 34th Street subway, Grand Central station, New Jersey ferry boat commuters, The Brooklyn Bridge and much more. You even get a glimpse of the many wharves that once jutted out into the Hudson River from lower Manhattan.

The file on Archive.Org gives the date of its production as 1941, but as some of the comments from other viewers of this clip point out, some images featuring a rocket and jet fighter as well as vehicles that were produced after 1941, can also be seen in the film.