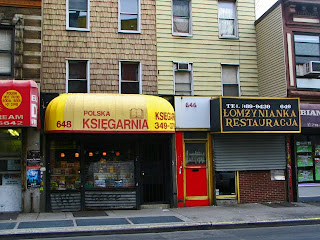 ~ So there we were, a plane load of passengers and crew on a United Airlines flight, flying in to New York’s John F. Kennedy airport, late on a Monday afternoon in March 2008.

With great interest and excitement, I looked out of my window (I always try and get a window seat), at the Long Island suburbs slipping quickly below the wings. My brief view of the New York skyline revealed the familiar look of lower Manhattan and a host of skyscrapers spearing into the sky as if they were trying to reach some distant planet.

As we flew in over Brooklyn my attention was caught by numerous structures that seemed to stand high over buildings and landscape alike. Looking more like giant four-legged pins, these proved to be a constant source of fascination throughout my New York stay. They were of course, water towers – structures that seem to be unique to the American landscape. Not that other countries don’t have water towers – they do. But surely not in the huge numbers that dot New York’s buildings and other parts of the American environment.

An article in Wikipedia notes that during the 1800s, the city required the installation of water towers on buildings higher than six stories to prevent the need for excessively high water pressures at lower elevations, which could burst municipal water pipes. Today, even modern buildings have these water towers perched high over already high structures.

A quick taxi ride delivered me to my accommodations for the next 28 days – the YMCA on Meserole Avenue, in the Brooklyn suburb of Greenpoint. After checking in, I immediately went back out to take a walk around the neighbourhood.

This is a ritual I always perform when I find myself in unfamiliar cities or locations. It gives me some idea of the ‘lay of the land’. I look for prominent landmarks (to help me find my way back to my room); the nearest bank or ATM; a local supermarket or deli where I can stock up on essential food items (water, fruit, snacks, etc); local cafés, fast food outlets or restaurants; the nearest subway station or bus stop; an internet café or public library with internet access; a laundry where I can wash clothes; and local bars and clubs which might offer live music or other entertainment.

But most of all, I try to get a feel for the neighbourhood ‘vibe’. Does it feel safe? Do the locals seem friendly? Do they look relaxed and happy? Are there lots of people hanging around on street corners looking like they have nothing to do? Will I have to walk through half a mile of dimly lit streets to reach the subway station? Or more importantly, if I return to my room at 2:00am in the morning, will I be safe? And so it goes.

To a certain extent, all this and more can be ascertained if you spend an hour or so carefully observing your surroundings. I am happy to say that I was delighted with my choice to use the Greenpoint YMCA as my New York base. I have written an extensive two part review of the Greenpoint ‘Y’, and my stay in the area already so I won’t repeat myself here (read Part One and Part Two).

My initial walk around Greenpoint revealed I had arrived in ‘little Poland’. Café’s, restaurants, hairdressers, tax agents, in fact retail outlets of all types and descriptions seemed to be targeted at the large Polish community that has made Greenpoint its home. Signs on several shop windows advertised positions vacant for Polish speaking shop assistants. A peek into one newsagent showed almost every publication to be in the Polish language. Not that any of this was a problem – I just hadn’t been expecting it.

I am always fascinated by the architecture of the cities I visit. Every country, and often individual cities within countries have their own distinctive architecture. The architecture of any town or city must surely be governed by the materials available to the inhabitants who build the homes and buildings that make up each urban centre. The amount of available land would also need to be taken into consideration. Given that most of New York city is built over a number of islands, making the best use of available land must have been a high priority.

Ignoring for now, the obvious architectural landmarks that are New York’s skyscrapers, what really caught my eye were the brownstones, row houses, and tenement buildings that the majority of New York residents call home. Many of these were built during a period of rapid expansion from 1870 to 1930. while many timber-framed buildings still stand, stone and brick became the city's building materials of choice after the construction of wood-frame houses was limited following the Great Fire of 1835.

Another distinctive feature I found fascinating were the fire escapes that adorn the façades of many older New York buildings. Again, thanks to Wikipedia we learn that “…the invention of these exterior steel staircases is widely credited to Anna Connelly who first registered a patent for a fire escape in the USA in 1887.”

Who knows just how many lives have been saved over the past 120 years by Connelly’s bright idea.

I was to learn much more about Greenpoint over the next four weeks, but as I sat down in a local café jet lagged and weary, and ordered something to eat, I was just happy to be in New York City, and looking forward to my first visit to Manhattan. But that’s a story for another day.

Thanks to Wikipedia for some of the historical information contained in this post.