In Review: Zapata and the Mexican Revolution 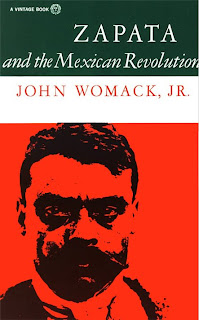 Bringing the Fields to the Federals - Review of Zapata and the Mexican Revolution, by Zachary Parker

The prized possession of Emiliano Zapata was the rights and respect of lands that were the heritage and legacy of the families of Southern Mexico. Why a man with seemingly simple demands must find himself in short time the supreme chief of a revolutionary army, a guerrilla general or even a symbol and figurehead to a movement that would sweep across the nation is an injustice to logic. The story of Zapata's crests and ebbs traverse local politics, insurgencies, and outright warring and international martyrdom.

What becomes evident of the pages of John Womack Jr's dedicated and highly detailed telling of the travails Zapata and his rugged, unremitting rabble is that the scope of the agrarian movement exponentially distends with every snub, assault or closed door in the faces of the poor farmers of the south.

To read of the obscene scenarios of peonage, penury and uniform despotism these people met at the hands of the commercial planters, and the state and federal government at their behest, is to read of fear, shame and guilt.

The bulk of the book puts the reader into the shoes of the Zapatista regulars, the farmers in their whites and sandals. From field to federal district they march, armed first with pleas, then Mausers for their cause. With a cast and crew of citizens (whose names and backgrounds are greatly detailed, making for a substantial gift of memory to keep straight), rallying behind their chief in the struggle to retain their communal lands and livelihood, the reader finds the intrigues and politicking as engrossing as the fiery escapades and raids against the Federales.

Of interest to an observer of the popular movement – especially after Zapata has risen to the patriarchal high of supreme general of the revolutionary army – is the Sissyphusian spiral that the leader and the movement plunges. That Zapata, a man who wanted only reform in the local land policy against those who were gaining while hardship reigned in the lives of the poor farmers, had to assume the role, to bear the target of the oppressing governments was unjust. His single-minded dedication to justice and land rights made him a hero, but this same single-mindedness also exposed him to a life wrested from the very farmland he wished to save.

What John Womack, Jr. offers is more narrative than simply historical in delivery. He makes use of impressive, ample quotes, insights and documents, both official and personal in accounting the social and political struggle that Mexico was home to in the early 20th century. The atrocities committed by every successive dictatorial regime, the waves of oppressive governments and their crushing armies; all is covered in great detail and expression.

The reader may well be swept up in the flurry of events. They may though, also be caught under the weight of the details, names and political entanglements of the revolution. That Womack was able to weave through all the broken alliances, nuances and sheer amount of partisans and players of the era is a testament to his exploratory depths and knowledge of the subject.

What struck me most, and as disheartening in the endeavours of the Zapatista mythology, is that for every length the man and mission moved forward, for every triumph and coup achieved, the displaced force was inexorably replaced by a worse entity.

From the initial ousting of the dictator Diaz came a champion, Francisco Madero. However, when Madero proved to be not only an opponent of change, but an enemy of the revolution, Zapata took the struggle further.

Seeing the devastation and forced deportation of the southern farmers, labour and draft of the people of the south, Zapata then moved against Huerta. Under the banner of the constitution, Carranza brings about nothing less than a continuation of the depravity and evils of a government against the needs of its citizens. Throughout all this turmoil, Zapata never moves from his initial goals of agrarian reform. The hubris shown in the decade of turmoil by the succession of generals, presidents and political bodies is extreme and most unsettling to dissect.

"Rebels of the South, it is better to die on your feet than to live on your knees" sums up, though posthumously uttered, the years of Zapata's revolution. The progress socially, economically and ethically of the common workingmen and poor farmers of Mexico is all that the man sought. Zapata was called to this in his village, took it all the way to the president (all subsequent ones) and paid the ultimate price for it.

Emiliano Zapata took up the challenges of local reform, and brought it to the district, the state, and to the federal level. He was forced by fate to become the champion of Mexico's poor and indigenous citizens. For this he has a place in the pantheon of rebel heroes and martyrs. What he really deserved though, and what he really wanted was to continue farming the traditional lands his family had been farming for generations before him.