25 YEARS OF THE CHARLIE PARKER JAZZ FESTIVAL
Each year the City Parks Foundation assembles some of the finest musicians in the world who reflect Charlie Parker’s musical individuality and genius, to promote appreciation for this highly influential and world-renowned artist. This year the organization celebrated the 25th anniversary of the Charlie Parker Jazz Festival, a vibrant – and free – celebration of jazz in New York, bringing together stories, veteran players and the next generation of jazz artists.

I caught the final two concerts over the weekend of August 26 and 27, and these account for Days 72 & 73 of my New York City stay. The first four hour feast of Jazz took place from 3:00pm to 7:00pm at Marcus Garvey Park in Harlem. On the bill, in order of appearance were Charenee Wade, Louis Hayes, Terri Lyne Carrington and Social Science, and finally, the Lee Konitz Quartet. The second four hour event took place at Tompkins Square Park where I believe the festival had its beginnings 25 years ago. On the bill that day were Alicia Olatuja, Tia Fuller, Lou Donaldson, and Joshua Redman. 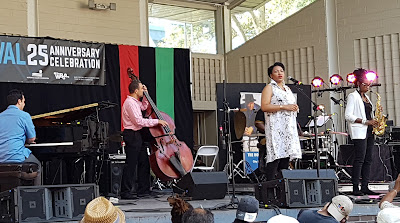 Above: Charenee Wade
CHARENEE WADE
Charenee Wade is described in the program notes as "a brave new voice on the modern jazz frontier, intent on using her gift to address social change." I didn't get the name of all her fellow musicians, but I did note the name of her brilliant saxophonist Letitia Benjamin.

LOUIS HAYES
Louis Hayes has a jazz resume that goes back to the heyday of jazz when he was a drummer for John Coltrane, Thelonious Monk, and Cannonball Adderley, to name just a few of the greats he has played with. Given the people he performed with, you won't be surprised to learn that Louis Hayes is now 80 years of age, and still drumming with a sure hand and a steady beat.

TERRI LYNE CARRINGTON
Terri Lyne Carrington is a rare phenomenon, not just in jazz but in pretty much any other music genre you care to name since she is drummer, and a great drummer and percussionist at that. Terri and her fellow musicians perform as Terri Lyne Carrington and Social Science. Terri's original jazz compositions also offer something rare within the genre with one of her band members adding beats and hip hop style vocals to some songs––several of which are quite political, something else which I assume is fairly rare in modern jazz. I managed to  jot down some random lines from one song which will give you are sense of her concerns: "Complacency has its price"; "The battle has just begun," and "How long can freedom wait?" 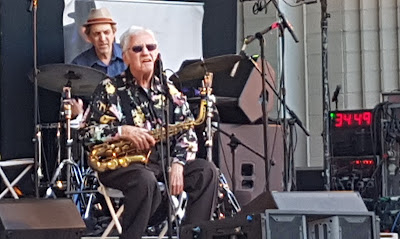 LEE KONITZ QUARTET
The final group of the day was the Lee Konitz Quartet. If I thought Louis Hayes was old at 80, I was in for a bigger surprise when the 89 year old Lee Konitz walked on stage with his relatively young trio of supporting musicians behind him. From time to time Lee's onstage antics bordered on farce when he kept refusing to stand or sit in one place––specifically, directly in front of the microphones––and kept wandering around the stage while he played his alto-saxophone un-miked, much to the consternation of the sound crew and his fellow musicians. 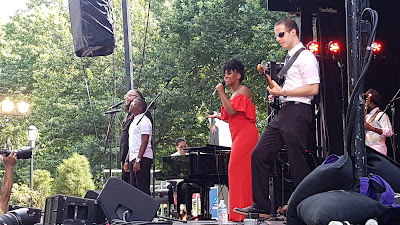 ALICIA OLATUJA
Ever since Alicia Olatuja took center stage at President Obama’s 2nd inauguration, as the featured soloist with the Brooklyn Tabernacle Choir, this luminous songstress has been in exceedingly high demand. It wasn’t long before she put together her very own backing jazz ensemble and released 2014’s aptly named Timeless, a testimony to her ageless voice. Reared in St. Louis, with the echoes of venerated blues and jazz artists past coursing through her veins, Olatuja emigrated to New York to complete her Master’s degree in Classical Voice & Opera at the prestigious Manhattan School of Music. Migrating from strictly opera and musical theater performance, she began feeling her gospel and soul roots, as she shared the stage with legends Chaka Khan, BeBe Winans and Christian McBride. Shortly thereafter, famed composer Billy Childs tapped Olatuja (praised by the New York Times for her “luscious tone”) for a nationwide tour of original works honoring Laura Nyro. Performing with her own band at virtually every jazz festival under the sun, this velvet voiced woman, with soul to spare, has only just begun to shine. 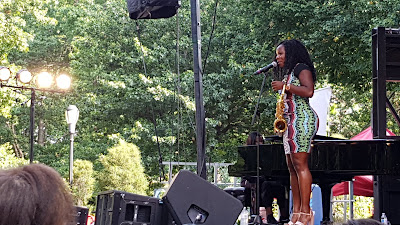 Above: Tia Fuller
TIA FULLER
Tia Fuller is a saxophone virtuosa, a touring artist and full-time professor (at the Berklee School of Music). Having been featured on the cover Saxophone Today, Jazz Education Journal, and JazzTimes Magazine, she is a one of the world’s best jazz multi-instrumentalists. Tia was selected to be a member of the all-female band touring with Beyoncé, as part of the I AM..Sasha Fierce and Beyoncé Experience World Tour promoting the superstar’s CD’s, where Tia has played in various venues throughout the US, Europe, Africa, Asia and Australia. She is a featured soloist on the Beyoncé Experience DVD (Me, Myself and I), I AM Yours I DVD (Wynn Theatre) and also appeared on number of major television shows, such as The Oprah Winfrey Show, Today Show, Good Morning America, BET Awards, American Music Awards and Total Request Live, and the 2010 Grammy Awards. She has also performed as the featured soloist with Beyoncé for President Obama at the White House. Tia has recorded four albums with her quartet. The first was 2005’s Pillar of Strength, followed by 2007’s Healing Space, an offering of “melodic medicine.” Her third album, 2010’s Decisive Steps, took the #1 JazzWeek rating for two weeks straight, and nominated for their Best Jazz album. In 2012, she released her 4th album, Angelic Warrior, which received praise from Wall Street Journal, New York Times and numerous jazz publications. Tia’s quartet has performed all over the world at many prestigious venues and she’s received numerous awards, winning Downbeat Critic’s Poll-‘Rising Star’ two years in a row for Soprano Sax (2014), Alto Sax and Flute (2013). Between balancing her teaching and tour life, Tia feels that she is fulfilling her purpose here on this earth, that is to “serve as a light for others.” 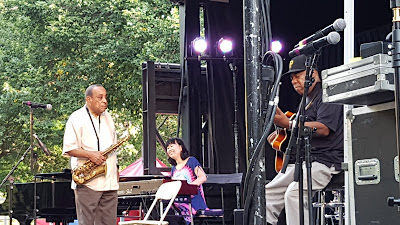 The irrepressible Lou Donaldson on stage.

LOU DONALDSON
When someone mentions the greatest alto saxophonists of all time, only one name truly stands out: that of “Sweet Poppa Lou” Donaldson. With origins as the bandleader of Blue Note Records in the 1950s, Donaldson had already established himself as a new voice in jazz at only 25 years of age. As he directed many albums at this time, Sweet Poppa Lou was proud to collaborate with the biggest jazz instrumentalists of the day. With numerous recordings in the bag, Donaldson broke out with 1967’s Alligator Bogaloo, a revolution in the form, as he boisterously showcased his virtuoso status. His long and storied career has garnered him too many achievements to list; but his induction into the International Jazz Hall of Fame and the his naming as a National Endowment for the Arts Jazz Master (the absolute zenith of awards in the jazz realm) can not be left unmentioned. His bluesy, unmatched style is still on full display, as he dazzles and amazes crowds with his nimble fingers and crystal clear sound.

JOSHUA REDMAN
“Unparalleled among horn players today,” is the way JazzTimes (and a host of other noteworthy publications and critics, in so many words) describe longtime jazz legend Joshua Redman. Often referred to as one of the top sax men of his generation, Redman has worked with some of the most treasured jazz artists of all time, counting McCoy Tyner, Brad Mehldau, The Bad Plus, and Brooklyn Rider. While he has the ability to seamlessly blend into an ensemble and flawlessly synergize with the group, he can just as easily break out into a solo that drops the jaws of jazz fans of all ages. While his globally-successful recorded albums are a delight, many posit that his live shows are simply the stuff of legend. Aside from his stellar saxophone majesty, Redman is a stupendous composer and bandleader. With longstanding friends and collaborators at his side (Aaron Goldberg, Reuben Rogers, and Gregory Hutchinson), Redman leads The Joshua Redman Quartet to unprecedented heights of musical innovation. With stylistic motifs that date back to the ‘50s, the Joshua Redman Quartet is still a cutting-edge, thoroughly modern enterprise in jazz celebration.

Any questions, comments or suggestions? How about complaints or compliments? Let me know via the comments box below.
Posted by Jim Lesses at 3:22 AM