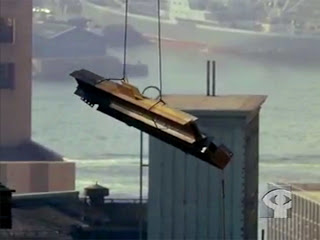 
High Steel is a short documentary offering a dizzying view of the Mohawk Indians of Kahnawake (pron: Gun-na-wa-ga) who work in Manhattan erecting the steel frames of skyscrapers. Famed for their skill in working with steel, the Mohawks demonstrate their nimble abilities in the sky. As a counterbalance, the viewer is also allowed a peek at their quieter community life on the Kahnawake Reserve, in Quebec.


One of the first construction projects the Kahnawake helped build was the Saint Lawrence Bridge (1886-87) linking Kahnawake to Montreal Island. As Kahnawake men employed as ironworkers and bridgemen worked hundreds of feet above the water and ground, a legend began that the Kahnawake men had no fear of heights.


Over the years, Kahnawake men have continued to be employed as ironworkers in Canada, with many also moving to New York City to work on the city’s skyscrapers. Kahnawake men participated in building the Empire State Building, the World Trade Centre, and other major skyscrapers in New York City, as well as many bridges. This short film examines some of the work and lifestyle of these workers.


High Steel, Don Owen, provided by the National Film Board of Canada


This documentary by acclaimed filmmaker Alanis Obomsawin introduces us to Randy Horne, another high steel worker from the Mohawk community of Kahnawake, near Montreal. As a defender of his people's culture and traditions, he was known as "Spudwrench" during the 1990 Oka crisis (a land dispute between a group of Mohawk people and the town of Oka, Quebec, Canada).


The hour long film presents a unique look behind the barricades at one man's impassioned defence of sacred territory, and is both a portrait of Horne and the generations of daring Mohawk construction workers that have preceded him.


Spudwrench - Kahnawake Man, Alanis Obomsawin, provided by the National Film Board of Canada


Both films are amongst the hundreds of films available via the National Film Board of Canada website. Another wonderful online resource for all to enjoy.
Posted by Jim Lesses at 10:47 PM