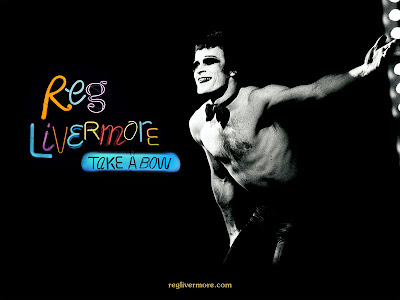 ...
Reg Livermore has been entertaining Australian audiences for over 50 years. Sadly, I have missed the majority of the many, many shows he has appeared in – either as part of an ensemble cast or in his one man shows – because Reg lives and performs mostly along the eastern seaboard of Australia, and rarely it seems, does he make it to Adelaide.

However, I count myself lucky to have at least seen him in his seminal one man shows Betty Blokk Buster Follies in 1976, and Sacred Cow II in 1981. I also saw his production of Ned Kelly when it toured to Adelaide in 1978, a show for which Reg was writer, director, and designer.

So I was absolutely delighted to see that the Arts Centre Melbourne, was staging an exhibition celebrating his extraordinary career, and that my visit to Melbourne coincided with the exhibition, which as of this writing I have already visited three times.

Reg Livermore – Take A Bow, showcases his groundbreaking solo shows that began with Betty Blokk Buster Follies, and features some of the many stage costumes worn during that, and other shows. Also on display is material from his personal archive, including show posters, manuscripts, interviews, and awards, all of which allow the visitor a rare glimpse into the creative talent of a true Australian theatre legend.

The centre piece of the exhibition features a giant screen replaying songs from Betty Blokk Buster Follies. And it is these songs and performances that have drawn me back to the exhibition several times already.


Some of the costumes on display include those of the characters Tara The Incredible, Carmen Marahuana, Allison Diesel, Captain Jack, Joan of Arcadia, Vaseline Amalnitrate, and the immortal Betty Blokk Buster herself.

As an occasional performer myself, I have always been drawn to other singers and actors who are not afraid to completely inhabit the characters they play and give them full expression. Reg Livermore not only does that but he has never been afraid to tread where many other performers are afraid to tread. In recognition for his many years in theatre, Livermore was honoured as an Officer of the Order of Australia (AO) in 1996, and in a special ceremony at Melbourne’s Docklands in 2006, Livermore was named one of 100 Australian Entertainers of the Century.

His latest show and tour Turns (with another legend of the Australian theatre Nancye Hayes), took place in 2011. At 73. Reg Livermore doesn’t look like he is ready to stop performing anytime soon, and Turns was just the latest in a long career that began in 1957 with Around The Loop, and has gone on to included television (as an actor and presenter), and appearances in more than 100 theatre and television shows.

Apart from his one person shows, and the dozens of other theatre performances he has been in, Reg Livermore has appeared in some of Australia’s biggest theatre productions including Hair, Jesus Christ Superstar, The Rocky Horror Show, Barnum, Iolanthe, The Producers, and My Fair Lady.

I was delighted to see that a collection of songs from the Betty Blokk Buster Follies show is now available on CD and DVD, and these can be bought via Possum Records. Reg has also written an autobiography, Chapters and Chances a coffee table style photographic history, published in 2003, and he is currently completing a second volume, There Are Things I Haven't Told You. Chapters and Chances can be bought directly from Reg Livermore via his website, and I note that he is more than happy to sign copies of the book if you request it.

Both the book and the DVD can also be purchased at the Arts Centre Melbourne during the exhibition.

I have made my own humble tribute to Reg Livermore using footage from the Take a Bow exhibition, edited to his beautiful performance of the Charles Aznavour song, What Makes a Man?