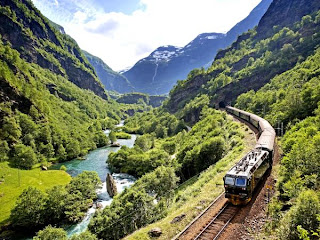 Welcome to my weekly roundup of the some of the more interesting discoveries I’ve made as I wander the digital highways and byways of the Internet. This week we’re examining great train journeys.
The longest rail journey I’ve ever made took place back in the early 1970s when I travelled from Greece to London. To be quite honest, I don’t remember much of the journey now, but when I read Top 10 European Train Trips by Randall H. Duckett on the National Geographic Traveler website, it did trigger some long lost memories of that ride
National Geographic don’t mention rail travel from Athens to London in this feature (I don’t know if it is even possible to take a train from Athens to London anymore), but among their ten suggestions they list Switzerland’s Chocolate Train, the Trans-Siberian Railway (Moscow to Vladivostok), the Orient Express (London to Venice), and the Danube Express (London to Istanbul).
Much of European train travel is about efficiency and comfort—punctually leaving and arriving and having a cozy seat or sleeper compartment in which to devour the latest issue of the Economist. But rail travel in the United Kingdom and on the Continent is also about experience: gaping out the window at Alpine glaciers, savoring gourmet cuisine in a restored last-century dining car. Accordingly, our ten favorite European trains don’t necessarily offer the fastest journeys—just the most memorable. All aboard!
-o0o- 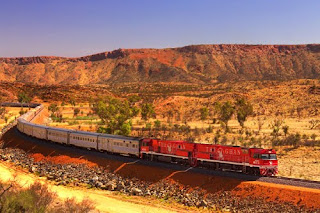 12 of the Most Scenic Train Rides in the World
Not to be out done by National Geographic Traveler, the Boots n All website have coincidentally compiled their own list of the 12 of the Most Scenic Train Rides in the World.
In her article, Zoë Smith mentions Norway’s Flåm Railway, whose “…20km descent is amongst the steepest in the world, twisting through yawning ravines, cascading waterfalls, remote Nordic farmhouses and snow-dusted mountain peaks.”
While this 20km trip last barely an hour, Russia’s Trans-Siberian, journey takes a good week to traverse the 9,000km (6,000 miles) of track that snakes its way from Moscow to Vladivostok. And that’s without getting out along the route to explore some of the cities the Trans-Siberian passes through.
Like the Trans-Siberian, Norway’s Flåm Railway also gets a gong in the National Geographic roundup of great journeys.
Other rail journeys that rate a mention in Zoë Smith’s piece include the Canadian Rockies Railway, the Cusco to Machu Picchu (Peru), The Palace on Wheels (India), and The Ghan (Australia), which departs from my home town, Adelaide. If you are considering a train journey, both these articles are a great place to begin your researches.
More Information
National Geographic Traveler: Top 10 European Train Trips…
Boots n All: 12 of the Most Scenic Train Rides in the World...
-o0o-
Maeklong Market, Bangkok
Here’s one train journey that has to be seen to be believed, as a train passes through Bangkok’s Maeklong Market. On the surface this seems like a rather unremarkable event until you actually see how the stall holders and the train have found a way to coexist together.
Posted by Jim Lesses at 9:14 AM