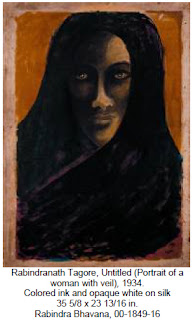 The Asia Society Museum in New York City is presenting an exhibition of Nobel Laureate Rabindranath Tagore’s paintings and drawings.

Titled, Rabindranath Tagore: The Last Harvest, the exhibition marks the 150th anniversary of Tagore’s birth, and is the first U.S. museum exhibition devoted to his artistic legacy. The exhibition comprises more than 60 works on paper, drawn from three collections in India.

The exhibition runs September 9 through December 31, 2011.

While I have a large volume of the collected works of Tagore’s poetry, which includes many illustrations, I must admit to being pretty much in the dark about his career as an artist. In deed, Rabindranath Tagore (1861–1941) is lauded around the world as a poet and writer, yet few outside India (including myself) know that he was also a highly regarded visual artist.

A transformative figure in the modern cultural history of India, Tagore began painting in 1924 at the age of 63 (there’s hope for me yet!). He had no formal training, but his artistic practice grew from his habits as a writer and poet, with revision marks and scratched out words on his manuscripts becoming free-form doodles.

He was encouraged to pursue art by his friend Victoria Ocampo, an Argentinian socialite and poet. With Ocampo’s help, Tagore mounted the first exhibition of his artwork in Paris in May 1930. The show then travelled to Europe, Russia and the United States, earning him much critical acclaim. He continued to paint until his death at the age of 80 in 1941. 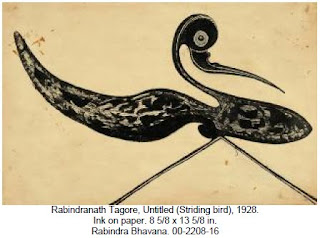 The exhibition is divided into four thematic sections. A section titled The Beginning looks at the origins and development of his drawing and painting. Beyond the Pages explores Tagore’s landscape paintings. Discovery of Rhythm considers how his creative work in other fields, particularly music and dance, enabled Tagore to project movement and gestures into pattern, forms and fields of color in his drawings and paintings. The Faces of the World section explores Tagore’s representation of the human face, the most frequently recurring form in his painting.


About Tagore’s lifeBorn in 1861 to a wealthy and prominent Bengali family, Rabindranath Tagore published his first poetry collection at the age of 17. He attended school at the University College of London in 1878, but soon returned to India to manage his father’s agricultural estates. As Tagore’s fame grew in the West, he remained devoted to political and social progress in his home state of Bengal. 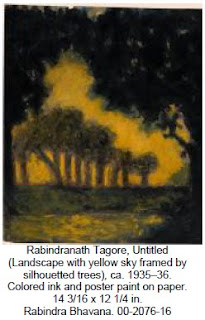 Tagore received the Nobel Prize for Literature in 1913—the first non-European to win the prize—for the English translation of his work Gitanjali. In 1915 he was knighted by the British government, but later renounced this title in protest of British involvement in the massacre of civilians in Punjab.
Rabindranath Tagore was a passionate advocate for the abolition of the caste system and for Indian independence, and he became good friends with Mohandas Gandhi, whom he was first to dub Mahatma (“great soul”). He wrote the national anthems of both India and Bangladesh. He died in 1941 without seeing an independent India.

Unfortunately, I won’t be anywhere near New York for the remainder of 2011, so I won’t be able to visit this exhibition, or take part in other events planned around the exhibition. However, if you are lucky enough to live in New York City, or are planning a visit between now and the end of the year, why not take the time to check out this exhibition during its four month run.

-o0o-
Below you will find a selection of the many books by and about Tagore on Amazon.Com. Click on the images to go directly to the Amazon page to explore further.