In the Shadow of the Samurai 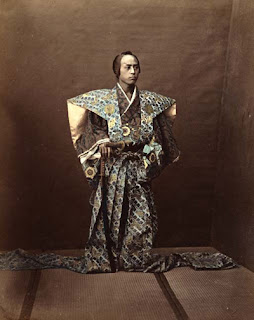 ~ I have been a long time fan of the late Japanese director, Akira Kurosawa, ever since I first saw his classic samurai epic, Seven Samurai. If you are not familiar with the work of Kurosawa, you will almost certainly be familiar with the work of George Lucas’ Star Wars, Sergio Leone’s A Fist Full of Dollars starring Clint Eastwood, and the 1960 western, The Magnificent Seven.

What got me thinking about all this is a press release which crossed my desk (umm, computer screen), recently announcing a tour focussing specifically on the culture of the samurai warrior. Since I am not the only person fascinated by these ancient fighters and their culture, I thought I would pass on the information here.

Esprit Travel & Tours are specialists in tours which deeply immerse travellers into the heart of Japanese culture. The company is offering a new tour with a focus on the history and culture of the samurai. The way of the samurai, known as bushido, has fascinated westerners for hundreds of years. In this tour (planned for April/May, 2010), group members will travel through Japan focusing on the era of the samurai, with introductions to the castles, battlefields, customs and the mystique of the samurai.

The tour will include visits to a range of original, reconstructed and castle ruins which offer a glimpse into the lifestyle of the ruling class of the samurai. Participants will also attend a festival commemorating the battle of Nagashino, which serves as a template for discussions of the important battles that delineated the epoch periods of Japanese history. Introductions into the ancient craft of sword making, along with special sessions with sword masters will allow you to come to a greater understanding of the importance of the sword in Japanese culture.

Staying at an authentic onsen will immerse you in the style of living experienced by the samurai for centuries with tatami-matted rooms, full kaiseki meals and luxurious hot spring baths. As an upscale tour of one of Japan’s major historical threads – the way of the samurai that is woven into the very fabric of Japanese culture.

If you have ever yearned to learn more about the way of the samurai and explore historic Japan with its castles and donjons, now is the time to do it. Call Esprit to register at 800-337-7481 or visit www.esprittravel.com to learn more. The Shadow of the Samurai Tour is a 12-day journey from April 30 – May 12, 2010 and costs approximately $6,250. More details about the tour itinerary can be found here…