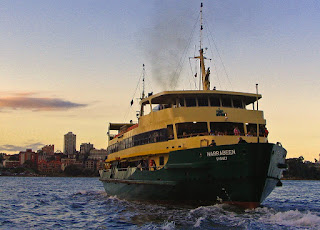 ~ Have I told you about the day I spent ferry-hopping my way around ? No? Well, then, this is as good a time as any to tell you about one of Sydney’s hidden gems – the Day Tripper transport pass.

The $17.00 gives you unlimited transfers across the whole of ’s trains, buses, and ferry services. During my stay I decided to purchase one and use it to ride as many of ’s iconic ferries as I could. In the end I only managed to travel on four of eight ferry routes, but I thoroughly enjoyed every minute of my time on the Harbour.

My first ‘port of call’ was of course, Circular Quay, where I boarded the first available ferry for my adventures out and about on . As it happened, the first ferry I spotted was going to Manly, so I quickly boarded and found some free space up by the bow.

I should have guessed the Manly ferry would be one of the most popular operating out of Circular Quay, and indeed a good 80% of the passengers were tourists and visitors like myself.

As we cast off from the quay, the jockeying for prime photographic positions was well and truly underway. Those passengers on the right (or starboard) side of the ferry, concentrated their cameras on the Sydney Opera House, while those on the left/port side, aimed their ‘weapons’ at the . The best placed travellers at the bow of the ferry were of course, able to capture both landmarks, while those at the stern aimed their cameras at the slowly receding city skyline, before turning their attentions to both the Opera House and .

The 30 minute trip to Manly went smoothly enough, and as I disembarked at , my intention was to spend another 30 minutes having a quick look around before reboarding the next ferry back to Circular Quay. Two hours later I finally forced myself back onto a ferry to complete that circuit!

Ah, Manly. Even in April the sunbathers were still to be seen stretching out on the sand soaking up as much warmth as the late autumn sun could offer.

While there, make sure you take the time to sample the fish-n-chips from one of the numerous outlets along the foreshore, or The Corso, that strangely named thoroughfare leading from to the main beach.

The ferry to and from Circular Quay sails parallel to the ‘heads’ separating the north shore from the south. As we cruised past the entrance to – or if you prefer, the entrance to the – the ferry bucked and heaved in the rising swell. Tourists around me oo-ed and ah-ed as the sea spray hung in the air, and the ferry carved its way into calmer waters again for the remainder of the journey to Circular Quay.

At Circular Quay I quickly boarded the ferry service. This service makes a number of stops along the , and includes Kirribilli, where the Australian Prime Minister has his lodgings (at the appropriately named Kirribilli House).

Back at the Quay my next cruise was on the Balmain/Woolwich ferry. Instead of doing the full circuit, I decided to jump off after several harbourside stops at Greenwich Point. From the landing site I had a clear view of the skyline, and as the afternoon sun began dipping in the west, I took photo after photo of a golden sunset reflecting off the glass and steel of the buildings in the CBD.

My final ride was on the longest of the eight major ferry routes servicing . This route, which runs up the to the suburb of , is serviced by a RiverCat vessel – a large catamaran type craft designed to navigate the lower depths of the river, especially at the wharf end.

By the time I boarded the RiverCat, the sun had all but disappeared below the horizon. For the next hour, I and my fellow passengers were treated to a spectacular evening cruise that took in , , , Olympic Park, and almost a dozen other harbourside stops. And best of all, I was able to stay on the craft and return by the same route – albeit in reverse order – and once again wallow in the luxury of Sydney Harbour at night.

In a previous entry (Circular Quay, Sydney) I wrote: “I never thought I’d say this, but I think the area around Circular Quay is as vibrant, exciting, and involving as any similar part of New York City (where I spent two months last year).”

Well, I never thought I’d say this either, but in terms of setting, beats , hands down. Of course, has more skyscrapers, and taller ones than , but in this case size doesn’t matter.

What has is one of the most stunningly beautiful natural harbours in the world. Port (to give its official name) is 19 km long with an area of 55 square kilometres. If you were to walk around the perimeter of the harbour you would cover a distance of around 317 kilometres.

For my small investment of $17.00 I saw only a fraction of this vast expanse of water and the beautiful city that has grown up around it, but I loved every minute of it. If you have the time to do as I did, I urge you to spend as much time on the harbour as you can. I guarantee you, you won’t be sorry.