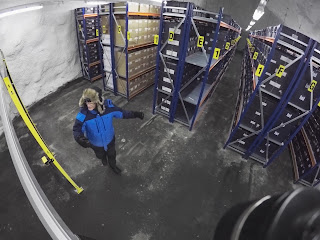 Nestled in the Svalbard archipelago lies a small unassuming-yet-sturdy building created to last forever. While it may look minimal, this building is one of the most important in the world because it hold the key to continual hitman survival. It houses the world’s largest—and most secure—collection of crop diversity.

While the Svalbard Global Seed Vault isn’t the only gene bank in the world, its seed collection is the most likely to maintain funding while also withstanding war, natural disasters and climate change.

Built by the Norwegian government and encouraged by the Crop Trust when the vulnerability of other gene banks came to light, the Global Seed Vault serves as a timeless record of crops throughout generations. It is meant to ensure—regardless of what happens to the planet—that agriculture can survive and thus, the human race can survive.

Since 1903, more than 93 percent of fruit and vegetable varieties in the United States have gone extinct. With a changing climate, the only way agriculture can adapt and continue to feed the world is with crop diversity. The Global Seed Vault’s mission is to ensure agriculture remains resilient to environmental changes.

There are currently more than 880,000 samples in the vault—seeds from every country in the world. Ultimately, the hope is to greatly increase this number. The vault has the ability to store 4.5 million varieties of crops and a maximum of 2.5 billion seeds.

It is every citizen’s moral duty—and in the world’s best interest—to come together to fund the Svalbard Global Seed Vault, helping it to not just survive, but thrive. Every $625.00 saves a single crop variety. Please join GoPro in supporting Crop Trust’s Seed Vault to safeguard crop diversity forever.

Below, follow world-renowned scientist Cary Fowler into the heart of the arctic, where the Svalbard Global Seed Vault lies nestled in the frozen Norwegian landscape.

UPDATE: FEBRUARY 25, 2017
Just days after adding this post, more information popped up on my Facebook feed linking the a Smithsonian magazine story titles, Syria Just Made a Major Seed Bank Deposit in the Svalbard Seed Bank.

According to the story, in 2011, during the Arab Spring, “…an advisor to the Crop Trust, which operates the vault in Svalbard, reached out to the Syrian-based seed bank to ask if they needed to back up their seeds. Though officials initially refused, they eventually acquiesced—just in case. Soon after, the political situation began to degrade.”

Read more from the Smithsonian magazine here...
Posted by Jim Lesses at 3:11 PM