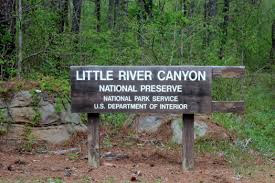 Alabama is a state full of all types of adventures for outdoor lovers - from hiking, birdwatching, cycling, canoeing, and much more.

The Lost Art of Walking
Perhaps the number one outdoor adventure in the state is hiking/backpacking/walking. There are many areas across the state, including rough outdoor trails to paved walking tracks that enable most everyone to get outdoors and get some exercise.

Some of the key areas that make this activity tops is hikes into Little River Canyon along the Eberhart Trail in northeast Alabama where this canyon is actually the deepest east of the Mississippi. Hikers can also check out the nearby Lost Falls Trail in DeSoto State Park. For beginners there is a "starter" 20- mile long Conecuh Trail in the Conecuh National Forest near Andalusia and visitors to Historic Blakely State Park will enjoy the leisure paths there.

The most famous of the trails in Alabama is the 100 miles long Pinhoti Trail that runs from the southern end of the Talladega National Forest northward to Georgia. In highly populated areas there are scenic trails on Ruffner Mountain in Birmingham, 20 miles of trails near Huntsville in Monte Sano State Park and scenic trails in the Wade Mountain Preserve near Huntsville.

Packpackers will enjoy the 14- miles long Sipsey Fork Loop in the Sipsey Wilderness which is part of the Bankhead National Forest and there are spectacular views in the Walls of Jericho area near Hytop.

Just plain ole walkers will find hundreds of places around the state including tracks in their own towns or cities. Other areas include Moundville Archeological Park south of Tuscaloosa, Vulcan Park in Birmingham, Horseshoe Bend National Military Park in Dadeville, Noccalula Falls Park in Gadsden, Natural Bridge of Alabama at Natural Bridge, Shark Tooth Creek near Aliceville, Dismals Canyon at Phil Campbell, Old Cahawba Archeological Park near Selma, the beautiful beaches at Gulf Shores and the 2.5 mile hiking trail at the University of Alabama Arboretum. 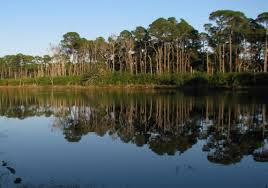 Birding has quickly become the number two outdoor activity as more and more birding trails open up around the state. Locations offering birding include the Mobile Bay where there are 50 sites and southward on Dauphin Island are several sites including the 164-acre Audubon Bird Sanctuary. A variety of migratory birds can also be viewed at Fort Morgan on Mobile Bay. The Upper Cahaba River Birding Trail is located in the Hoover area. The North Alabama Birding Trail extends along the Tennessee River.

On the eastern side of the state birdwatchers will find the Eufaula National Wildlife Refuge which is home to the American Bald Eagle. The Bon Secour National Wildlilfe Refuge in Gulf Shores offers a variety of migratory birds. In the upper part of the Mobile-Tensaw Delta are many locations to observe over 250 species of birds. Tour operators use pontoon boats, air boats and pirogue canoes.

West of Gulf Shores on the shores of Mobile Bay is the town of Fairhope which offers birders elevated boardwalks to view hummingbirds at the Weeks Bay National Estuarine Research Preserve.

Other sites include the Perry Lakes Park in Marion County which provides birders the nation's first birding tower rising above the canopy of trees along the Cahaba River. During the peak summer viewing season, some 200,000 grey bats can be watched as they emerge from Sauta Cave in north Alabama near Scottsboro at the Sauta Cave National Wildlife Refuge.

Take To The Water 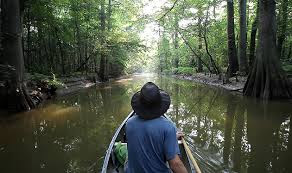 With thousands of lakes, rivers, creeks and Gulf beaches, the sports of canoeing, kayaking and sailing are enjoyed year around across the state. River cruises are offered on the Alabama River in Montgomery, Black Warrior in Tuscaloosa, Tennessee River at Joe Wheeler State Park and around Mobile Bay.

Canoeists will enjoy the trip up Bottle Creek to Mound Island in the Mobile-Tensaw Delta which is the nation's largest delta. Whitewater paddlers can experience Class II and Class III novice - intermediate water on the Locust Fork of the Black Warrior River near Blountsville.

Kayakers find the trip down the Cahaba River near Birmingham to be an exciting journey. The Cahaba is considered to be the longest free-flowing river in the state and is home to rare two-foot-tall Cahaba Lilies. Sea kayaking is a popular sport around Dauphin Island and nearby Barrier Islands south of Mobile. The best kayak training river in the Southeast is the Coosa River near Wetumpka with Class II rapids and the challenging Moccasin Gap.

At the bottom of the largest canyon east of the Mississippi flows Little River Canyon which offers advanced - to expert whitewater Class IV and Class V rapids along Johnnies Creek and you will also find Class II rapids on the East Fork of the Little River. Other whitewater adventures can be found near Section on South Sauty Creek that offers Class III and IV rapids.

For a more leisurely paddle, you can take the 44-mile long Loyd Owens Canoe Trail near Heflin on a section of one of the cleanest rivers in the eastern USA - the Tallapoosa River. A second route is along the beautiful Escatawpa River near Wilmer. The less adventurous may rather take a boat ride on Mobile Bay to see the 1885 Middle Bay Lighthouse, take a sailing adventure in the Bay or have fun making the Bay crossing on the Mobile Bay Ferry that moves vehicles between the Civil War fortifications of Fort Morgan and Fort Gaines. 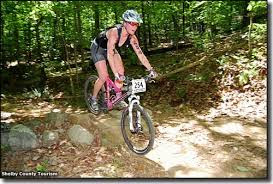 With a variety of terrain the state offers many places for cycling and mountain biking. Oak Mountain State Park has a three-hour long, 17 mile mountain bike loop. A 12 miles of routes can be found on the Swayback Bridge Trail near Wetumpka and for those wishing to peddle a long trip there is the 56-miles Auburn-Tuskegee-Loachapoka Loop. There is also a 40-mile scenic route between historic Wetumpka and Tallassee.

A tougher route might be the scenic Horseblock/Cheaha Mountain Ride covering 40 miles from Anniston up Cheaha Mountain to the highest point in Alabama. A more leisurely route in the converted rails-to-trails route from Anniston eastward to the Alabama/Georgia line along the Chief Ladia Trail which extends on 27 miles of a paved former rail bed.

In the northern part of the state at Fort Payne there is the 32-mile DeSoto-Mentone Ridge Run with an optional two-mile side trip to DeSoto Falls.

Finally, along Alabama's beautiful Gulf Coast, cyclists will enjoy the 24-mile Eastern Shore Trail which is a winding pedestrian/cycle path from the U.S.S.


Article Source: http://EzineArticles.com/?expert=Wayne_Ruple
Posted by Jim Lesses at 11:43 AM No comments: