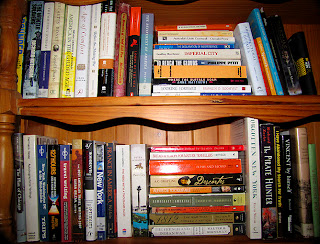 I have been consuming books at a great rate over the last three months, which accounts for the lack of entries on this ‘travel’ blog. It also reflects the fact that I haven’t been travelling much over the past year – although I did spend five weeks house sitting in Melbourne during January and February. In fact, my Melbourne stay has been responsible in part for my return to reading. The city has some great second hand bookshops, and on my return to Adelaide, I carried with me a carton of 22 books that I just could not ignore as I trawled through my favourite stores.

I used to have a collection of several thousand books, but five or six years ago I sold my house and have been living in a series of rented accommodations ever since. As a result, I got rid of the bulk of my collection, with the rest packed in boxes, which are in turn stacked in my niece’s shed.

The previous collection of books covered everything from folk music to folk tales, history to fantasy, fiction and non-fiction, politics and art, and much more. Sadly, I never seemed to have time to read most of the books I bought. They just took up space on the bookshelves waiting patiently for the day when I would finally find the time to devote to them. Unfortunately, that time never came.

However, now that I am pretty much retired, I have plenty of time to read, and that is what I have been doing. Most of my new, small, but growing collection of books deals with 17th and 18th century history as it relates to the United States and Europe. I have also become interested (in a very general way) with architecture, art, and philosophy. To lighten my reading list, I try to mix non fiction titles in amongst the serious tomes, and I must say, I have found my renewed enthusiasm for reading quite addictive and of course stimulating and educational.

I can’t imagine why you would be interested, but here for the record is a list of the books I have read to date in 2012: