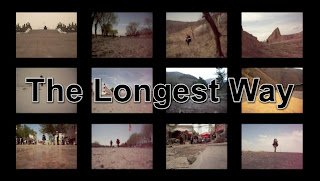 Christoph Rehage set out on November 9th, 2007 – his 26th birthday – to walk from the Chinese capital Beijing to Bad Nenndorf in Germany. One year (November 13, 2008) and 4646 kilometres later he ended his walk – still in China – at Urümqi, a couple hundred kilometres shy of the border with Kyrgyzstan.

His website, The Longest Way, documents his walk in great detail, and the film he put together of the walk (embedded below), has received over 1.1 million hits on YouTube.


Christoph states that although you can see images of him sitting on a plane or riding in a boat in the video, those were shot during breaks from walking, “…either to sort out bureaucracy issues or to take care of some personal things.”


A year in the planning, Cristoph writes of the walk that “…getting as far as I got was an experience for which I am very grateful.”


It is interesting to see Rehage’s transformation from a “clean cut, beardless, lean, mean, fighting machine,” into the weather beaten, long-haired, bearded, adventurer he became by the time he ended his mammoth walk.


Christoph Rehage now studies in Berlin, and has no plans to embark on other extended walks. He is however, writing a book about his walk, and while I assume its initial publication will be in German, I would be great to see it translated into English.


Until then, enjoy Rehage’s year-long walk and growing beard via this time lapse video.