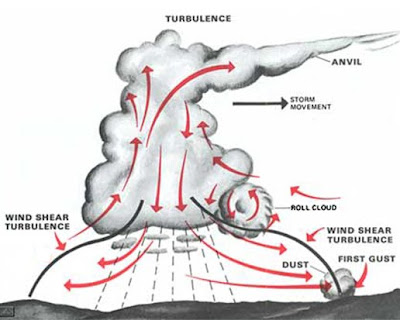 1. A state or condition of confusion, movement, or agitation; violent disorder or commotion.

Well you can’t expect things to go right all the time, can you? If you travel often and far enough, some things are bound to go wrong from time to time, and this past week, following my return to after nine delightful days in , things began to go wrong.

The above definition of the word, turbulence, is a good summation of the current political situation in . Since the massive 110 billion euro bail out by the European Union that may or may not save from financial bankruptcy, the country has been in turmoil as the PASOK government, under the leadership of George Papandreou has turned the screws on wage earners, public servants, and the agricultural community.

For months the people of have been under pressure to bear the burden of pay and pension cuts, loss of workers entitlements, government sector cutbacks, and more. Their response has been a series of strikes and stoppages that have played havoc with the country’s transport systems including road, rail, air and ferry services.

What all this turbulence is doing to the country’s tourist industry is anyone’s guess.

Like I said, after nine very pleasant days in Paris, I flew into this “…state or condition of confusion,” etc, on Monday afternoon, and within thirty minutes of checking into my hotel I received the news that the flight I had booked to take me from Athens to Ikaria the next day (Tuesday) had been cancelled due to planned industrial action by airport workers. Taking the news in my stride, I arranged with Olympic Air to fly to the island on Wednesday.

Unfortunately, while airport workers were back on the job on Wednesday, the train and bus drivers were not. So early Wednesday morning I caught a cab for the fifty minute drive from to the airport – at a cost of 35 euros. So far, so good. I had plenty of time to check in, have a coffee, pass through security, and wait for the flight to .

It didn’t take long for the thirty or so passengers to settle into their seats for the 40 minute flight to the island, and within an hour or so of my arrival at the airport, we took off into an overcast sky. It was at this point that we ran into another kind of turbulence: 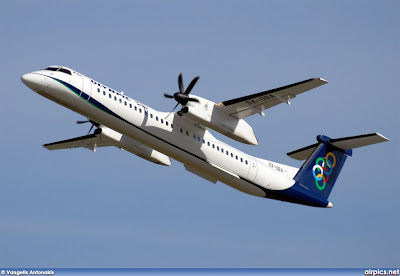 1. Irregular motion of the atmosphere, as that indicated by gusts and lulls in the wind.

“…Gusts and lulls in the wind,” my eye! Within minutes of take off, the small, twin prop Olympic Air DHC-8-400 (see image) hit enough turbulence to keep the cabin crew on their toes, and the passengers strapped to their seats. After a quick snack we prepared to land at , but if it was there, I for one couldn’t see it. There was thick cloud over the island and the plane was bucking and dancing through severe turbulence constantly. Ten minutes after we were supposed to have landed, we were told we were heading back to due to severe weather conditions and an unspecified mechanical problem.

We were met at airport by a fleet of fire engines and a mass of ground crew and engineers who quickly surrounded the plane and examined it closely. The pilot explained that the presence of fire engines and ground crew was standard operating procedure when a plane returns to the airport with suspected mechanical issues, and that we had nothing to be concerned about. 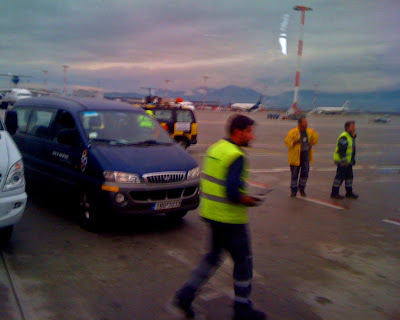 Image: Ground crew and engineers rush to examine our plane on landing 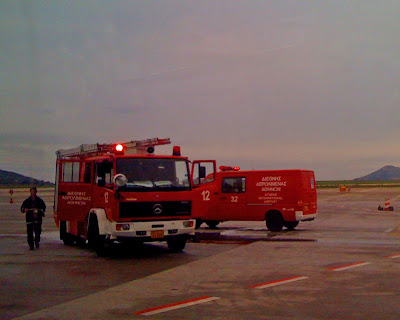 We disembarked and went back to the terminal to wait for a second plane which would take us back to . An hour later, dancing and weaving once again through severe turbulence so bad that even the cabin crew had to stay strapped to their seats, we again approached Ikaria through thick clouds, high winds, and more aerial acrobatics. The island was still nowhere to be seen, and for the second time we turned back to and thoroughly disheartened, gave up on any plans of reaching the island.

Apart from the inconvenience, and the stress of all the travel and bouncing around in the air, I was certainly happy to be back on the ground. I’m even happier after reading one online report while researching information about air turbulence which stated that, "Of all weather-related commercial aircraft incidents, 65% can be attributed to turbulence."

Which brings to mind the old adage: It’s better to be safe than sorry. To which I can only add, Amen to that! Sadly, it didn’t take long before the turbulence in the air was again swapped for turbulence on the ground.

There was chaos at the taxi rank as hundreds of passengers lined up for cabs into and elsewhere. I decided that since I had already spent 35 euros getting to the airport, I would try and save some money by sharing a cab with someone travelling back to . It seemed like a good idea at the time, and when some guy agreed to share the cost of a cab with me we both got into a taxi and headed for the port.

Nearly an hour and 50 euros later we reach and I get ready to leave the cab. I gave the driver a fifty euro note, and asked for 25 back, thinking the other guy would pay his share of the fee. The cabbie took my fifty euro and said that since the other guy was going a little further, he could pay his share of the fare when he got out, and that since the fare up to that point was 50 euros, he would keep all my money. I tried to explain that we had an agreement to share the cost of the ride. The other guy kept quiet throughout this, and offered no money by way of upholding his part of the deal I thought we’d agreed to.

It was then I realised that I had been scammed by the Greek guy who had offered to share the cost of the taxi with me. With the cabbie refusing to give me any part of my fifty euros back, since as he said, that was the fare anyway, and the other passenger ignoring my request for even ten euros as part of his contribution to the fare, I had no choice but to walk away, chastened by the experience but a lot wiser than when I got into the cab. 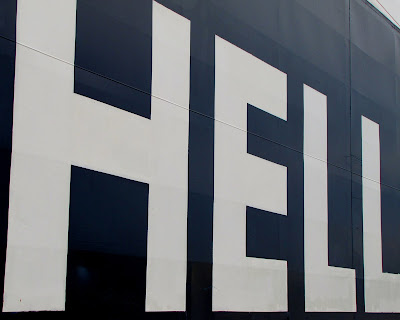 Image: [Hell] This just about sums up my day!

It isn’t the fifty euros that bothers me. Money comes in through one hand and goes out via the other one all the time. It was the fact that both driver and passenger took advantage of me. It is also a sad reflection on how far the Greeks and Greece have fallen as a people and as a country. That the other passenger could sit there and knowingly screw me over like that is the thing that hurts the most. I was quite happy to share the cost of the cab, and even would have paid more than half my share, but I would never consider screwing someone else over like this man did.

For all I know he got out a hundred yards further down the road, and paid nothing for his ride. If I had been quick enough to think of that, I could have refused to get out of the cab and said, drop this man off first, and me after. That way the tables would have been turned against the other passenger, and he would have had to pay the bulk of the fare. But it was too late for that, and I had no choice but to suck it up and go on my way.

However, every cloud has a silver lining, as the saying goes. Since I was walking past a travel outlet, I went in and bought a ticket for the Nissos Mykonos, the regular ferry that services . As it happens the ticket only cost 19 euros, a thirty euro reduction off the normal price of a full fare, which helped improve my mood somewhat.

My mood improved even more after I rang Olympic Air and cancelled my rescheduled, rescheduled flight and was told I would receive a full refund on the plane ticket.

So there I was, at the end of a long, tiring and stressful day, back at the Delfini Hotel in from whence my day had begun. I had spent 85 euros on taxi fares; had flown to Ikaria twice and still ended up back in Athens; had been conned and scammed, and had seen an ugly side of Greeks I hope never to see again.

It had indeed been a turbulent day.

Click here... to read probably more than you've ever wanted to know about turbulence and air travel.