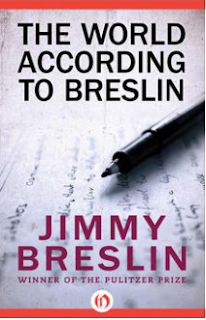 Remembering Jimmy Breslin
I came very late to the writing of Jimmy Breslin when I eventually 'discovered' him last year and bought an eBook copy of The World According to Jimmy Breslin, a 1988 compilation of some of his best essays. Since then I have added another seven Breslin books to my collection, and I am slowly working my way through all of them. I’ll let Wikipedia introduce the man:

James Earle "Jimmy" Breslin (October 17, 1928 – March 19, 2017) was an American journalist and author. Until the time of his death, he wrote a column for the New York Daily News Sunday edition. He wrote numerous novels, and columns of his appeared regularly in various New York City newspapers. He served as a regular columnist for the Long Island newspaper Newsday until his retirement on November 2, 2004, though he still published occasional pieces for the paper. He was known for his newspaper columns which offered a sympathetic viewpoint of the working class people of New York City, and was awarded the 1986 Pulitzer Prize for Commentary "for columns which consistently champion ordinary citizens".

Breslin, who passed away last week, was one of the old school newspaper greats, certainly in the same league as Joseph Mitchell, Alistair Cooke, and Meyer Berger, although the focus of his topics was often quite different.

Read A Part Of A Cop’s Past Lies Dead, the column Jimmy Breslin wrote following the murder of John Lennon in 1980.

If you can't find print copies of Breslin's books, many of his most popular works are now available as eBooks for Kindle, iPad, and other electronic devices. If you have never read the man, I urge you to seek out his work online, in secondhand bookshops, or electronically, and spend a few weeks as I am catching up with his remarkable writing.

OpDocs: Who Makes The Bronx? 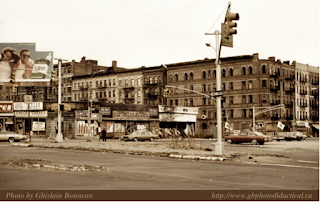 In the shade of the 4 train’s elevated track, Jerome Avenue’s dense clusters of auto-repair shops, storefronts, and manufacturers have long formed the economic spine of the Bronx, one of New York’s increasingly rare blue-collar neighborhoods. But as the city government considers rezoning the corridor to add residential development, change looms for the neighborhood’s social and economic landscape.

To make these profiles of the people who live and work around rapidly changing Jerome Avenue in the South Bronx, I decided to spend last summer [2015] there. That summer turned into 10 months. I spent so much time with the workers on Jerome Avenue that when I greeted them in the morning, smiling, they would nod back at me and say “cuidate” (“be safe”)! I found that the rhythm of Jerome Avenue is driven by the mechanics and street vendors who line its streets, and the shops run by hard-working families, who are often sustaining small businesses proudly handed down to them from generations past. 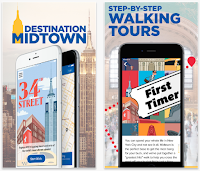 Planning a visit to New York City? If so you might want to check out the newish Destination Midtown app. Some of New York City’s top attractions are highlighted in this interactive tour guide to Midtown Manhattan.

The app features ten step-by-step walking tours that include 34th and 42nd Streets, parts of Fifth Avenue and Broadway, as well as suggestions for rainy days, nights out, the fashion conscious, and others.

Destination Midtown claims to be “your perfect companion to all the best landmarks, museums, restaurants, and shops.” Along with the ten walking tours users will find:

• Detailed attraction profiles featuring locals-only info, insider tips, photos, hours of operation, and more
• Perfectly-framed selfie spots to help you snag that next profile pic
• Always-up-to-date event calendar with Midtown’s top happenings
• The ability to save your favorite walks, attractions, and destinations in “My Trip” to help plan your day
• “Back of the guidebook” info about eating, drinking, and getting around in the Big Apple


The app, which is available as a free download for both Apple and Android devices, has been developed by the Destination Midtown Alliance, founded last year by Empire State Realty Trust. The Alliance is a coalition of businesses and attractions who joined together to spread the word about Midtown Manhattan as a primary tourist destination. The Alliance provides visitors with a variety of interactive itineraries of Midtown’s best sightseeing, dining, shopping and entertainment, all within a 15-minute walk of the heart of New York City, and the Empire State Building.

Here’s a six minute video from Expedia highlighting some of the main New York City attractions including those around the Midtown area:

More Destination Midtown information and links to the free apps…