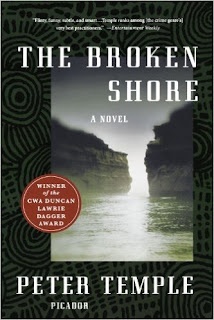 Peter Temple is one of Australia's best crime writer’s. He is a five-time winner of the Ned Kelly Award, Australia's most prestigious prize for crime fiction, and his novels have been published in at least 20 countries. He is also the writer behind the Jack Irish series that screened on Australian television last year—not that I had connected the two things (author/TV series) before I started to read The Broken Shore.

As per the standard tropes of the genre, our hero, Joe Cashin is plagued by the usual lawman's deficiencies: a failed relationship, smokes and drinks too much, is something of a loner, and has a hard-assed superior who thinks he alone has all the right answers, and who also thinks the crime at the heart of the book has been quickly solved and neatly wrapped up. Of course, Cashin does not agree and continues to follow up loose ends and new leads on his own. Needless to say, Cashin is proved right.

The story revolves around the brutal murder of a rich, elderly white man, at the (possible) hands of three Aboriginal youths. There is plenty of intrigue, false leads, dark secrets, small Australian country town politics, and seamy murders to keep lovers of the genre happy and guessing throughout the book.

The quality of writing is a big step above most of the crime fiction I have read over the past couple of years. Temple writes were others fear to tread. He makes liberal and frequent use of the coarsest of everyday language such as c - - t, f - - k, and Australia’s versions of the ’N’ word, abo and boong. His police officers are believable, and their talk rings true, and happily, Temple doesn't waste a lot of time with filler of the sort I dislike so much in crime fiction—extended descriptions of landscape, streets, nature, and the back stories of his lead characters. When he does mention these elements they are brief and too the point.

South African born, Peter Temple turned to fiction writing in the 1990s with the publication of his first Jack Irish novel, Bad Debts. This, and his subsequent Jack Irish novels (Black Tide, Dead Point, and White Dog) are set in Melbourne, and feature a protagonist who is both a lawyer and a gambler. In 2012, an ABC Television and German ZDF coproduction produced two full-length films of the first two Jack Irish books, with the international film star, Guy Pearce in the title role. How he juggles the two potentially conflicted occupations (law and gambling), is what helped to make the television programs, at least, great viewing.

Temple has also written An Iron Rose, Shooting Star, and In the Evil Day (known as Identity Theory in the US), as well as The Broken Shore and its semi-sequel, Truth. Based on this one story, I would be more than happy to seek out more of Peter Temple's work, and there is a lot of it, apart from the four Jack Irish novels.