The Bitter End—Loud and Live

I have written about that famed New York City venue, the Bitter End on numerous occasions on this blog, and today I am going to write more.

Coming of age during the heady folk and rock-filled days of the 1960s, I have long been aware of the place the Bitter End, and other long-lost venues have had in the development of modern folk, rock, jazz and blues music. Many of the biggest names in contemporary music have played on the venue’s small, unassuming stage. The Legends page on the Bitter End website name-checks dozens of comedians, musicians and bands including Neil Young, Bob Dylan, Bette Midler, Miles Davis, Billy Crystal, and Woody Allen, to name just six.

During each of my four visits to New York I have made a point of visiting the venue multiple times. Each time looking forward to seeing up-and-coming singer-songwriters, established bands, and first-timers. I have rarely been disappointed by the talent on offer. The Bitter End still holds true to its roots by hosting open mic’s, fundraisers, album launches, and tribute nights throughout the year, along with a full calendar of nightly music that often features as many as seven different acts.

So what’s a poor boy to do when he lives—as I do—10,000 miles away from the venue he holds in such high regard?

Thankfully, when it comes to the Bitter End, I, and potentially thousands of others, can log on to the nightly Live Internet Stream and enjoy the music from the comfort of our own homes. And that is exactly what I do as often as I can from my lounge room in Adelaide, Australia. In fact, as I write this, I am watching the regular Monday night jam hosted by Richie Cannata.

At this point I should probably mention that when it is 7:00pm in New York City (when the entertainment begins at the Bitter End), it is a very reasonable 10:30am the following morning in Adelaide! And since I am a 68-year-old retiree, and don’t have to be at work, or indeed anywhere at 10:30 in the morning, I have plenty of time—and bandwidth—to devote to watching great live music from the Big Apple. As the song says, Some days are diamonds.

In this post, apart from singing the venue’s praises once again, I thought I would mention several of the groups that have impressed me over the past few weeks as I have tuned in to the live feed, and share my brief communications with some of them. I should explain that when a group impresses my mightily, I make a point of seeking them out on Facebook (and pretty much everyone is on Facebook, nowadays), and sending them a personal message to convey my appreciation for the music they played during their sets. To my surprise, most people performing at the venue don’t seem to be aware that there is even a live feed reaching out to the world.

For example, when I sent a message to the group Wig Party just after they left the stage around 3:00am one recent morning, I wrote (in part):

Really enjoyed your great set all the way 'down under' here in Adelaide, Australia, where I have been watching the The Bitter End's live internet stream… I especially enjoyed the playing of your amazing guitarist, Vincent Ventriglia. That man really knows how to play. Dom Palombi [the drummer] is no slouch either. 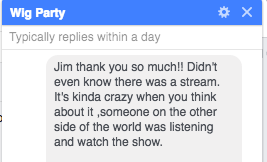 A member of Wig Party soon responded with:

Jim thank you so much!! Didn't even know there was a stream. It's kinda crazy when you think about it, someone on the other side of the world was listening and watch the show.

Crazy, all right. And a real treat. For the record Wig Party are guitarist and vocalist, Vincent Ventriglia, John Cisco (Bass/Vocals); Dom Palombi (Drums), and Hank Rosenthal (Keyboards and Vocals).

Another group that tore down the house recently was the four piece ensemble, LEVEL 5. The quartet are an “…instrumental fusion band led by drummer, Mark Feldman.” On Facebook, the promo material notes that the group performs compositions by the guitarist, Oz Noy, although it’s not clear if the tunes they play are all exclusively composed by Oz Noy. As it happens, the Oz Noy Trio also have a residency at the Bitter End, and precede Richie Cannata’s Monday Night Jam every week.

My message to Level 5 said in part:

WOW! You guys totally 'killed it' tonight at the Bitter End. What an amazing set… Most days I log into the venues live internet stream just for the joy and excitement of seeing bands and singers I have never heard of, and tonight Level 5 tore down the house.

In response the band sent this message:

Hey Jim! That's awesome! Thank you so much for the kind words. If you give me your email address and post code I can add you to our mailing list so you'll know about our shows. Thanks again.

The final group I want to mention is THE SECTIONALS, a trio of teenagers from New York City who play mostly original “Alternative, Rock, Blues” music. Their Facebook bio reads:
Sofia D’Angelo (guitar & vocals), Michael Golden (drums), and Cyan Hunte (bass) are three sixteen-year-olds with such a passionate love of music that they decided to make their own. From three different NYC schools, they met at a Lowell’s World Young Musicians Showcase at the Underground Lounge and formed the band in October 2012, and they have performed shows  throughout NYC and surrounding areas including The Bitter End, The Parlour, Tammany Hall, The Studio at Webster Hall and The Stephen Talkhouse to name a few. Their self-titled debut EP is available on iTunes and Spotify.

While a little rough around the edges, the group is a perfect example of why I watch the live feed from the Bitter End. You can never be sure who or what style of performer will take to the stage there. Today’s beginners may well go on to be the big stars of tomorrow. After all, Lady Gaga herself played the Bitter End in the early days of her career. I was impressed with the energy and enthusiasm (how could I not be), of The Sectionals, and sent them the following message via Facebook…

Just caught your set at the Bitter End, and wanted to say how much I enjoyed the show. I…liked how you throw yourself into your performance and ‘own the stage’. That is a skill that many performers never learn. Congratulations, again on a great set. I hope your career in music is long and successful.

OMG!! This so sick. Thank you so much for tuning in, so glad you liked our stuff.

To conclude, I have made a point of sending performers personal greetings to not only thank them for their music, but also because I think it is important to let them know that their potential audience stretches far beyond the narrow confines of that great venue on Bleecker Street. I know Wig Party, Level 5, and The Sectionals would have all gotten a huge buzz from playing at the Bitter End—that landmark venue that has launched a thousand careers—but all three groups clearly got a buzz from learning that I was watching their performances thousands of miles away on the other side of the planet.

Next time they play at the Bitter End, they will have that knowledge in the back of their minds, and hopefully it will inspire them to crank their performances up a notch or two and take them to a higher level. Taking a few minutes to get in touch through individual Facebook pages is the least I can do.

Finally, dear reader, I would encourage you to check out the Bitter End live internet feed for yourselves, and also take the time to seek out and get in touch with the musicians, whether soloists or ensembles, and send them a note or two of appreciation. You can be sure it will make their day—or night.


A little encouragement can go a long way.
Posted by Jim Lesses at 6:31 PM