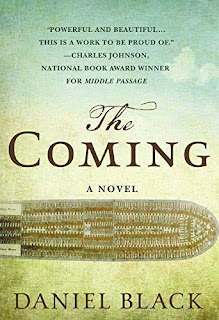 In The Coming, Daniel Black recounts the horror surrounding the capture of hundreds of native Africans, the weeks-long sea journey to America, and the subsequent sale into slavery of those few hardy native men and women who survived the brutality meted out to them at every step along the way.

In his Dedication to the book, Black writes:

“This book is dedicated to the memory and celebration of African souls lost in the Atlantic Ocean. We have not forgotten you. You are our strength. We, your children, exalt you and sing of your glory forever. This is also for those who reached land but never made it home. Your struggle was not in vain. We remember you. We name our children after you. We travel to Mother Africa and take you with us. You are home again.”

This is not any easy book to read. There are no snappy one-liners, no jokes, and little to ameliorate the constant horror that unfolds across some 280 pages. The book's narrator, recalls in unrelenting detail the almost constant abuse (beatings, whippings, rapes, and murders), experienced by the hundreds of captives from the moment of their captivity, to the moment they either died during the voyage or were sold into a life of bondage and slavery.

Lest readers of The Coming think that the author is overstating the events he describes in his novel, let me quote in full from The Irish Penny Journal, dated Saturday, November 28, 1840 (#22, Vol.1):


HORRORS OF THE SLAVE TRADE.—Commander Castle, R.N., while on service with the preventive squadron in 1828, in command of H.M.S. Medina, captured the Spanish brig El Juan, with 407 slaves on board. It appeared that, owing to a press of sail during the chase, the El Juan had heeled so much as to alarm the negroes, who made a rush to the grating. The crew thought they were attempting to rise, and getting out their arms, they fired upon the wretched slaves through the grating, till all was quiet in the hold. When Captain Castle went on board, the negroes were brought up, one living and one dead shackled together; it was an awful scene of carnage and blood; one mass of human gore. Captain Castle said he never saw anything so horrible in his life.

In the year 1831, the Black Joke and Fair Rosamond fell in with the Rapido and Regulo, two slave vessels, off the Bonny river. On perceiving the cruisers they attempted to make their escape up the river; but finding it impracticable, they ran into a creek, and commenced pitching the negroes overboard. The Fair Rosamond came up in time to save 212 slaves out of the Regulo, but before she could secure the other, she had discharged her whole human cargo into the sea. Captain Huntley, who was then in command of the Rosamond, in a letter, remarks—“The scene occasioned by the horrid conduct of the Rapido I am unable to describe; but the dreadful extent to which the human mind is capable of falling was never shown in a more painfully humiliating manner than on this occasion, when, for the mere chance of averting condemnation of property amounting to perhaps 3000l., not less than 250 human beings were hurled into eternity with utter remorselessness.”

Note: A Google Maps search suggests that the Bonny River mentioned in the above quote is in the region of Port Harcourt/Bonny Island, Nigeria.


Despite the horrors he writes about, Daniel Black's writing is remarkable beautiful, even to the point of being poetic. The following excerpts will give readers a sense of the overall mood and feel of the book and Daniel’s writing.

Writing about the impending birth of a child conceived as a result of rape and abuse during the sea voyage from Africa to the New World, Black writes:

Crewmen had used her body as a plaything, and now she carried someone’s offspring. She wanted to love the child, at least the part that was hers, but how do you divide a living thing? How do you love one part and seek the destruction of the other? And which part belongs to you? This was a mystery with no answer.

In her book, Where The Twain Meet, published in 1922, the Australian author Mary Gaunt writes about her travels through the Caribbean and in particular Jamaica. In successive chapters, Gaunt traces some of the history of slavery and the introduction of slaves into the Caribbean and Jamaica.

There are far too many horrific examples of abuse to select from in Gaunt’s book, but these few quotes from just one chapter, The Castles On The Guinea Coast, should more than suffice to support the research that Daniel Black put into writing The Coming. Unfortunately, Mary Gaunt neglects to provide details for the books or reports she quotes from throughout Where The Twain Meet, which makes it impossible to know more about a man called Spear, who she quotes from often.


Spear, in his book on the American slave trade, tells how, in the days when the trade was being suppressed, the British warship Medina, on boarding a slaver off the Gallinas River, found no slaves on board. “The officers learned afterwards, however, that her captain really had had a mulatto girl in the cabin … but seeing that he was to be boarded, and knowing that the presence of one slave was enough to condemn the ship, he tied her to a kedge anchor and dropped her into the sea. And so, as is believed, he drowned his own unborn flesh and blood, as well as the slave girl.”

In another passage, Mary Gaunt quotes a man called, Phillips, who I assume is the captain of a slave ship.

“We had about twelve negroes did wilfully drown themselves, and others starved themselves to death, for ‘tis their belief that when they die they return home to their own country and friends again. I have been informed that some commanders have cut off the legs of the most wilful to terrify the rest, for they believe if they lose a member they cannot return home again. I was advised by some of my officers to do the same, but I could not be persuaded to entertain the least thoughts of it, much less to put in practice such barbarous cruelty to poor creatures who, excepting their want of Christianity, true religion (their misfortune, more than fault) are as much the works of God’s Hands and no doubt as dear to Him as ourselves.” Surprising words from a slaver!

Surprising words from a slaver, indeed! How Phillips, Spear and the many other captains of slave ships could rationalise the hypocrisy between their so-called Christianity and the truly awful brutality they inflicted on their captives is beyond comprehension.

In several extended passages, Black seems to be writing about the world and society as it is today, while at the same time offering a commentary about a life of excess and indulgence before capture:

The allure of things caught our eye and made many of us desire what none of us needed. We began to throw away food simply because we didn’t want it. We crafted so much garb we couldn’t wear it all. We made huts large enough for ten when there were only five. This was not everyone, but it was enough of us to plant the seeds of excess among a people who generally valued simplicity. We had invited this plague of materialism and it had come.

As much as I marvelled at Daniel Black’s skill as a writer, I became emotionally exhausted by the constant descriptions of physical, mental and sexual abuse that filled the pages of The Coming. Add to these the regular descriptions of degradation (men and women lying and living in their own excreta and urine, vomit, and menstrual blood, et cetera), and I found myself wishing the book would end so that I, and the narrator of this sorry tale could finally get some peace.

But then maybe that is Black's intention. There is no way to pretend that the history of slavery was anything but savage and barbaric. The capture and removal of millions of Africans to the so-called New World, deserves to be exposed in all its many abhorrent ways. Especially since the legacy of this hideous trade still resonates around the world today, especially in the United States.

Daniel Black has written numerous books including, Perfect Peace, They Tell Me of a Home, The Sacred Place, Listen To The Lambs, and Twelve Gates to The City.

Daniel Black's writing is eminently suitable for quoting, as the following two quotes pulled from the book illustrate:

Silence is the enemy of history, and history is all we have.
— Daniel Black, The Coming

Greed cares not who carries it. It simply longs to live. And it can live in the heart of any man.
— Daniel Black, The Coming

Despite the graphic nature of The Crossing, I commend Daniel Black for writing about this import subject, and highly recommend the book to my readers, who may wish to purchase the book from Amazon in either print or eBook format via the link below.

Since first publishing this review on February 19, I have read more about the slave trade and the awful abuses that took place during one of the worst periods of Western history. As a result I have updated the initial review with quotes from The Irish Penny Journal, dated Saturday, November 28, 1840 (#22, Vol.1), and from Mary Gaunt's 1922 book, Where The Twain Meet. Both of these publications can be found on Gutenberg.Org.
Posted by Jim Lesses at 12:17 PM