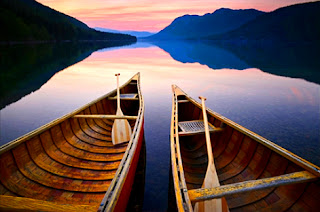 Two great TED talks for you today―both from National Geographic Explorer-in-Residence, Wade Davis. The first is a short (6:35 min) talk called,
Gorgeous Photos Of A Backyard Wilderness Worth Saving, in which Davis urges us to save a stunning wilderness paradise in Northern Canada. Here, sacred headwaters are under threat because they hide rich tar sands. Apart from the tar sands, major energy corporations like Shell are targeting the area for the vast fields of oil and gas the region holds.

If the Keystone Pipeline, and other such developments go ahead, this stunning landscape is going to be changed in ways that are all too familiar. Wade Davis states in his talk that Imperial Metals, one of the largest mining companies in Canada “…has secured permits to establish an open pit copper and gold mine which will process 30,000 tons of rock a day for thirty years, generating hundreds of millions of tons of toxic waste that by the projects design, will simply be dumped in the lakes of the sacred headwaters.”

Davis goes on to say “…Shell Canada has plans to extract methane gas from coal seams that underlie a million acres, fracking the coal with hundreds of millions of gallons of toxic chemicals, establishing perhaps as many as 6000 wellheads, and eventually a network of roads and pipelines and flaring wellheads, all to generate methane gas that most likely will go east to fuel the expansion of the tar sands.”

It is a truly frightening prospect for one of the most beautiful places on the plant.

Wade Davis: Gorgeous Photos Of A Backyard Wilderness Worth Saving

In the following much longer (22 min) 2007 talk, Davis examines some of the worlds endangered cultures, and expresses his concern over the rate at which cultures and languages are disappearing. Fifty percent of the world's 7,000 languages, he says, are no longer taught to children. Further, he argues that indigenous cultures are not failed attempts at modernity, nor are they failed attempts to be us ― they are unique expressions of the human imagination and heart.

More Information
Official Website...
Cultures on the Edge...
National Geographic...
Wade Davis on Wikipedia...
Posted by Jim Lesses at 10:49 AM