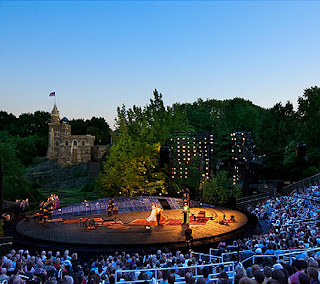 ~ The Memorial Day Weekend is considered the official start of summer in America, and I wish I was there to see the summer in. Since I’m not, I thought I might at least point lucky visitors and locals to a few of my favorite New York-centric websites and events.

Shakespeare In The Park
Over the past 50 years, more than five million people have enjoyed free productions of plays by William Shakespeare at the Delacorte Theater in Central Park. This year The Comedy of Errors is the Public Theater’s choice for their free annual Shakespeare In The Park production. The play kicks off Tuesday, May 28 and runs through until Sunday, June 30, 2013. All shows begin at 8:30 PM.​​​, and there is no intermission during the 90 minute performance.

Among the actors featuring in this year’s production will be Jesse Tyler Ferguson, one of the stars of Modern Family, Hamish Linklater, and Becky Ann Baker.
​
If you want to join the audience, you are advised to line up early on the day of performance.
​Free tickets are distributed on each performance day from 12:00 PM (midday) via the free lines at the Delacorte Theater in Central Park. Tickets are for the daily performance only. You can not line up to get tickets for the following day, or for an upcoming performance.
​
Once The Comedy of Errors finishes its run it will be followed by Love's Labour's Lost, A New Musical​, which is of course, a musical adaptation of Shakespeare’s Love's Labour's Lost. This production will run from July 23 - August 18​, 2013.

More information: Shakespeare In The Park…

I have written about this website before here… This is my ‘go to’ site for cheap tickets to a whole range of events in New York City and beyond. Via Goldstar you can find tickets (many at half their box office price) to numerous theatre productions and major sporting events, as well as walking tours, harbor cruises and much more. The great thing about Goldstar is that discount tickets are available for similar events in more than 30 other cities across the United States.

SummerStage is another annual arts and music program of New York’s, City Parks Foundation. It schedules a host of free events throughout the summer months, and 2013 will be no exception. As in previous years, the artists chosen for the 2013 program represent a wide range of genres and cultures, and perform in outdoor settings accessible to people of all ages and backgrounds. I was lucky to see one of my favourite performers, the late Gil Scott-Heron performing as part of the 2010 SummerStage concert series, and I am very grateful to the City Parks Foundation for giving me that opportunity.

SummerStage strives to develop a deep appreciation for contemporary, traditional, and emerging artists as well as the communities in which these artists originate. All SummerStage shows go on ‘rain or shine’, and are only cancelled if extreme weather events are forecasted.

Good things are said to come in three’s, and the above three sections point to three of the best in my experience. If you are visiting New York City for the first time, you are in for a treat, and I can only wish I was there with you. All things being equal, I plan on visiting America and New York City again next year, so you can be sure the next twelve months will be filled with much anticipation, and forward planning. I can hardly wait.
Posted by Jim Lesses at 4:21 PM