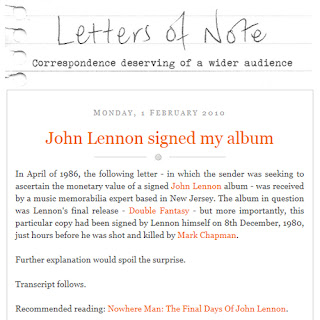 The Reading List today looks at the letters of famous (and infamous) writers of notes, letters and other correspondence. Appropriately enough, we begin with …

Letters of Note is an attempt to gather and sort fascinating letters, postcards, telegrams, faxes, and memos. Scans/photos where possible. Fakes will be sneered at. Updated every weekday.

Fascinating correspondence from such luminaries as the writers Kurt Vonnegut, Mark Twain, and Charles Bukowski. There is correspondence from Francis Ford Coppola to Marlon Brando; from Hunter S. Thompson to a 'Production Executive' at indie movie studio The Shooting Gallery; and a very creepy letter from Mark Chapman (the man who killed John Lennon), to an unnamed person enquiring about the possibility of auctioning his copy of Double Fantasy. The very same copy that Lennon had signed just hours before Chapman shot him! Read more... 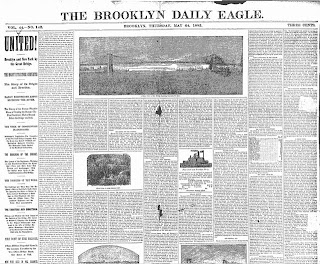 Now here is something right out of the vaults. It is an online collection of The Brooklyn Daily Eagle, a newspaper that has been in publication since 1841.

Incredibly, the early issues of the paper, dating from 1841 until 1902, have been archived by the Brooklyn Public Library, and readers and researchers can trawl their way through 60 years worth of publications for specific names, events, and other historic information.

The screen shot here shows the cover of the edition for Thursday, May 24, 1883. It was on this day that the Brooklyn Bridge was officially opened, and in a special 12 edition, the Brooklyn Daily Eagle covered all the major particulars of the opening including guest lists, speakers, a history of the construction project, and a whole lot more.

It is fascinating stuff, and history buffs looking to capture a sense of what it must have been like living in New York City and in particular Brooklyn during the late 1880s, will get a lot out of the Brooklyn Daily Eagle archives.
Posted by Jim Lesses at 8:51 AM