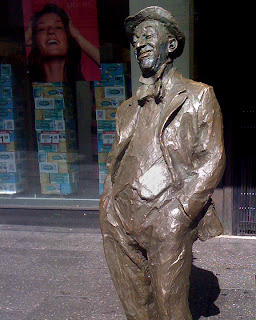 Image: Roy ‘Mo’ Rene statue
It just goes to show how rarely I walk down Adelaide’s Hindley Street. The statue of Roy ‘Mo’ Rene had been in place for at least four months in 2010 before my round the world trip, but if I had been on Hindley Street during those four months, I was completely oblivious to this wonderful statue.
Created by the South Australian artist, Robert Hannaford, to commemorate one of Australia’s most famous funnymen, the statue stands on the corner of Hindley and Leigh Streets.
The plaque set into the pavement at the foot of the statue states: “One of Australia's greatest and most loved comedians, Roy Rene was born Harry van der Sluys (or Sluice) in Hindley Street, Adelaide.

The son of a Dutch cigar merchant, and one of seven children, he loved to perform from a young age. His first professional job was at the Adelaide markets and his stage debut was as a singer at the Theatre Royal in Hindley Street.

The young Roy moved to Melbourne with his family to continue his acting career. He performed around Australia and New Zealand, eventually moving to Sydney where he joined the vaudeville circuit. Roy Rene became famous for his superb timing and funny gestures and for his distinctive make-up - a painted white face and black beard. 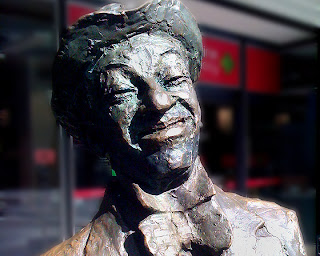 Later, by then known as 'Mo', he teamed with comedian Nat (‘Stiffy’) Phillips and the duo became the renowned 'Stiffy and Mo' comedy act. In the 1940s he turned to radio and his show McCackle Mansion was a huge success.
Some of 'Mo's' favourite catchphrases are still part of Australian vernacular. For example: "Strike me lucky," "Fair suck of the sav," "Don't come the raw prawn with me," and "You beaut!"


The Australian entertainment industry's annual 'Mo Award' for excellence in live performance is named after him.
Commissioned by the Adelaide City Council, the sculpture was created by Robert Hannaford, and installed in Hindley Street in February 2010.
Posted by Jim Lesses at 12:36 PM