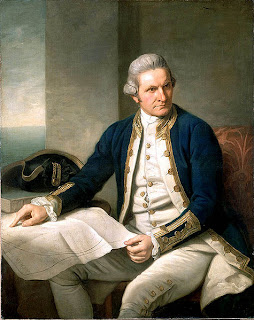 
Captain Cook chased a chook all around Australia,
He lost his pants in the middle of France and found them in Tasmania.
~ Australian childhood/schoolyard rhyme

If Captain Cook did indeed chase a chook (a chicken in Aussie vernacular), all around Australia, historians have ignored the event completely. As for losing his pants in the middle of France, and the subsequent discovery of them in Tasmania…  well, the less said the better.

I mention this today, because it was on this day, two hundred forty-one years ago (April 29, 1770), that the erstwhile English explorer Captain James Cook sailed into Botany Bay on the Endeavour. The bay derives its name from the unique plant specimens retrieved by the botanists Joseph Banks and Daniel Solander who sailed with Cook.

This first landing on Australian soil by the English explorer led to his claiming Australia for the English Crown, although the first English settlement at Sydney Cove, in what is now The Rocks district, was to come 18 years later.

Captain Cook's landing place is now part of Botany Bay National Park which is not only a historical site but a place for seaside picnics and many leisure activities as well.

A modern replica of Cook's Endeavour is usually docked at the Australian National Maritime Museum at Sydney's Darling Harbour. 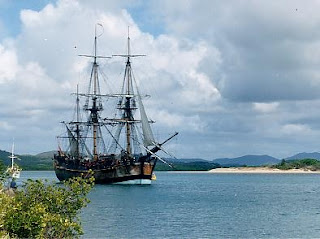