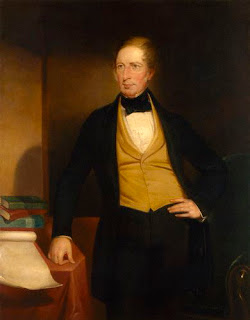 
Sturt was born in India, and among his many titles were surveyor-general, colonial secretary, soldier, convict administrator, and public servant. Charles Sturt also became a renowned Australian explorer.
In December 1826, he embarked on the Mariner with a detachment of his regiment in charge of convicts bound for New South Wales, where they duly arrived at Sydney in May 1827. While in Sydney, Sturt became caught up in the age of exploration, and soon became obsessed with the idea of discovering the inland sea that many people thought filled central Australia.
Despite his lack of experience and qualifications as an explorer, in November 1828, Sturt received approval to proceed with his proposal to trace the course of the Macquarie River.
Thus, Sturt began a long and illustrious career as an explorer of some of Australia’s vast inland waterways that saw him and his colleagues trace the course of the Macquarie and Bogan rivers, give names to the Darling River (after then Governor of New South Wales, Ralph Darling), and the Murray River (in honour of Sir George Murray, secretary of state for the colonies). Sturt also gave name to Lake Alexandrina at the mouth of the Murray (after Princess Alexandrina, who eventually ascended the throne and took the name Queen Victoria).