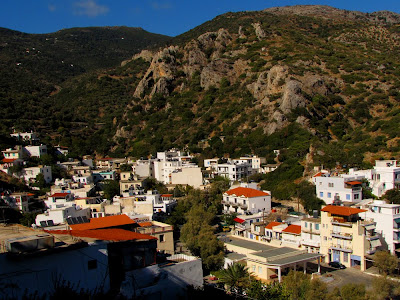 I don’t know a lot about hot springs and their healing properties, but people have been travelling to the small seaside town of Therma on the Greek island of Ikaria for centuries to immerse themselves in the hot, healing waters of radioactive springs, which many bathers claim have cured – or at least, eased the pain of – arthritis and other rheumatic aches and pains; made infertile women, fertile, and helped lessen the impact of a variety of other long-standing medical problems.

For the past two weeks I have been staying with my niece at Therma, where she is managing six rooms for an assortment of elderly Greek visitors who have come to bathe in one of several purpose built hydrotherapy centres in the town.

While here, I have also been reading the Anthony J. Papalas book, Ancient Icaria*. I will review the book in a later entry, but it has been fascinating to learn something about the history of the island, including the little village of Therma. 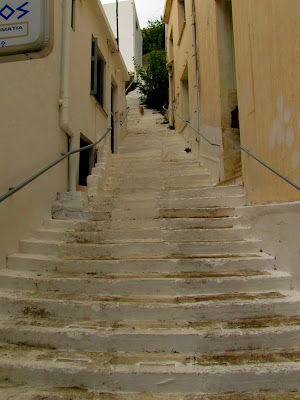 Image: A flight of stairs that would test even Rocky Balboa!

Looking at this place, nestled as it is in a small, steep valley, with its whitewashed homes and multi-storied hotels; narrow winding streets, twisting stairs, confined walkways, and ever-present village cats: looking at all this, it is hard to imagine the village has a history stretching back to the 5th Century, BC, and beyond. 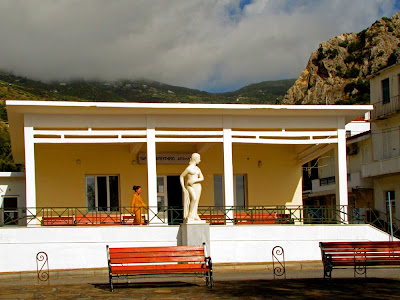 According to the Papalas book, there was a time when Therma was the island’s second city – the ancient city of Oenoe (now Kampos) being the first, or largest. Both ‘cities’ have now been reduced to large villages, and several towns – Agios Kirikos, Evthilos, Karavostamo, and Armenistis amongst others – have all overtaken Therma in terms of their size. However, Therma continues to draw thousands of visitors each year to her radioactive springs, and can rightly claim to have had the last laugh on many of the larger towns and villages on Ikaria.

This is because the peak season for visitors across the rest of the island is concentrated around the months of July and August, whereas Therma’s season can begin as early as May and continues through until the end of October, thus ensuring that villagers, café and restaurant owners, hotel operators and their numerous suppliers are able to earn a living servicing the needs of the elderly and infirm long after the tourists and summer visitors have left other parts of the island. 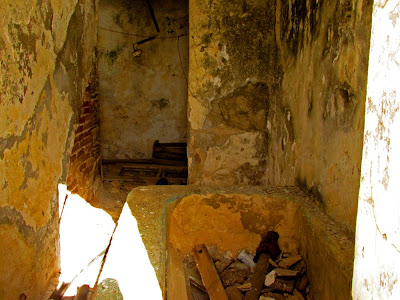 Having said that, without the hot springs, there is little reason to think that Therma would have attracted much attention from anyone in the last two hundred years, let alone the past two thousand. The small valley floor, and the steep hills surrounding the valley are not easily cultivated. The villagers who have managed to eke out a living by working the land have had to carve small, narrow terraces out of the surrounding rock and dirt to grow what few vegetables they could. In addition, they have planted extensive groves of olive trees, which seem to thrive on the precipitous slopes. Meanwhile, the ever present goats which many families still tend in Ikaria, are perfectly suited to the island’s rocky landscape. 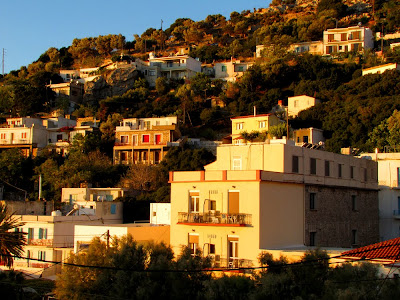 With the summer rush well and truly over, it has been a real pleasure to spend some time in this ancient village, winding down from the hustle and bustle of New York City and my travels through southern America. I spent a couple of hours here in 2008, when my brother-in-law Ilia, was still in the early stages of building his three story Helion (Sun) Studios. It has been a long, slow process – everything on Ikaria seems to involve a long, slow process – and he is still not finished fitting out all nine rooms. However, one more winter should see everything finally completed in time for next year’s season of health seekers and sun worshipers. 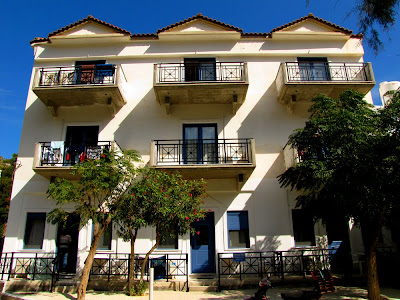 *A note about spelling: Anthony J. Papalas uses the anglicized lowercase ‘c’ in Icaria. However, since the letter ‘c’ does not occur in the Greek alphabet, throughout this blog I have chosen to keep the Greek spelling for the island – hence, Ikaria.