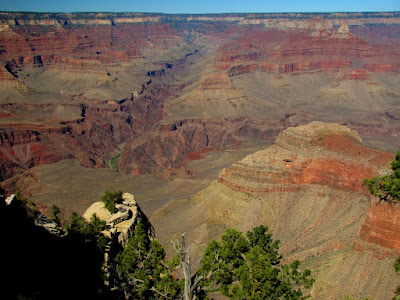 Image: The in the early morning light
The . The name seems to say it all. However, nothing really prepares you for the size, scale, and grandeur of this true natural wonder of the world. The canyon has always been high on my list of places to visit, and I was delighted to have had the opportunity to spend two nights there this past September. Let me say at the outset though, that in my opinion a day and a half is nowhere near enough to soak in the atmosphere and power of this massive national park. Having said that, it is probably more time than most people seem to spend there. But more of that later.

Located in , is one of the ' oldest national parks. Within the park lies the itself, a massive gorge of the . Covering some 1900 square miles (4927 km2), the 280-mile long, one-mile deep canyon ranges in width from 10 to 18 miles across. The first European to see it (in 1540) was the Spanish explorer García López de Cárdenas, a conquistador attached to Francisco Vasquez de Coronado's expedition into New Mexico, and other parts of what are now the southwestern United States. had hoped to conquer the mythical Seven Cities of Gold.

On my first evening at the canyon I spent several hours at Yavapai Point taking in the sunset, and simply marveling at the powerful forces that – over a period of 17 million years – have shaped the massive chasm stretching off into the fading light. On Saturday morning, after watching the mule riders ready themselves for their journey down the , I then spent another four hours or so soaking up the views.
… 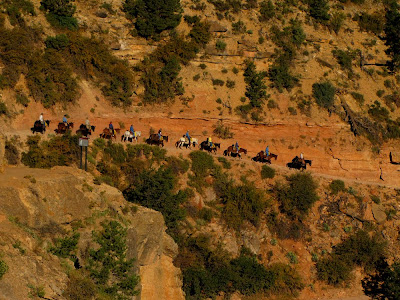 Image: Mule riders descend the deep into the heart of the

The is home to 70 species of mammals, 250 species of birds, 25 species of reptiles and five species of amphibians. Somewhere out there in the blue haze also were up to 172 wild condors, either soaring high above the canyon floor or perched in aeries looking for their next meals.

Once on the brink of extinction due to poaching, lead poisoning, and habitat destruction, the California Condor (Gymnogyps californianus) inhabits only the area, , and western coastal mountains of and northern . In 1987 all remaining 22 wild condors were caught and moved to and the Los Angeles Zoo. Numbers have risen steadily through captive breeding and, beginning in 1991, condors have been reintroduced into the wild. As of August 2010, there are 384 condors known to be living, including 188 in the wild.

The quiet observer will see numerous squirrels and kangaroo rats, lizards, a wide variety of birdlife and the delightful mule deer. 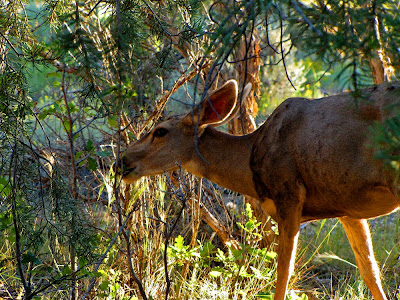 Image: A mule deer keeps cautious watch as it grazes near the

An average of twelve thousand people a day visit the , and most of these head for the South Rim and the . Maybe it was because I was visiting well after peak tourist season, but if there where 12,000 visitors there during my stay – I didn’t see them. Many visitors arrive by bus on day tours arranged by any number of tour companies. At most, these visitors get a couple of hours to ‘see’ the canyon. From my observations, at least ninety percent of these visitors where simple intent on standing as close to the rim as possible while friends or family members took photographs of them blocking views of the canyon itself. Having ticked the off their lists of places to visit, they then rushed off to buy souvenirs, eat and drink and make restroom stops before heading off in their coaches once again.

The good people at Grand Canyon Old West Jeep Tours - from whose site I took the above information - have even created a video outlining the full day tour.

Whew! That’s a pretty action packed day from what I can see, and little time is set aside for deep appreciation of one of the greatest natural phenomena on the planet. Clearly, if you are interested in spending even an hour or two contemplating life, death, nature, the environment and such like, you will not want to join this or similar tours.

Not that I am suggesting all the locations included in the one day tour outlined above are not worth a visit. I’m sure they are. It’s just that personally, I prefer to see them at a much slower pace which allows plenty of time for quiet reflection and deep appreciation – as this quote from John Muir’s* 1902 booklet, The Grand Cañon Of The Colorado attests:

In a dry, hot, monotonous forested plateau, seemingly boundless, you come suddenly and without warning upon the abrupt edge of a gigantic sunken landscape of the wildest, most multitudinous features, and those features, sharp and angular, are made out of flat beds of limestone and sandstone forming a spiry, jagged, gloriously colored mountain-range countersunk in a level gray plain. It is a hard job to sketch it even in scrawniest outline; and try as I may, not in the least sparing myself, I cannot tell the hundredth part of the wonders of its features—the side-cañons, gorges, alcoves, cloisters, and amphitheaters of vast sweep and depth, carved in its magnificent walls; the throng of great architectural rocks it contains resembling castles, cathedrals, temples, and palaces, towered and spired and painted, some of them nearly a mile high, yet beneath one's feet. All this, however, is less difficult than to give any idea of the impression of wild, primeval beauty and power one receives in merely gazing from its brink. The view down the gulf of color and over the rim of its wonderful wall, more than any other view I know, leads us to think of our earth as a star with stars swimming in light, every radiant spire pointing the way to the heavens. ~John Muir, The Grand Cañon Of The (1902)

With John Muir’s words ringing in my head, I headed out again into the late afternoon sun to spend another three hours sitting on various boulders overlooking the Canyon, and marveling at the forces of nature that have shaped this world renowned site.

I also marveled at the stupidity of some visitors who despite the dangers, insisted on standing on the most dangerous points they could find in order to shoot the most dramatic photographs they could get.
… 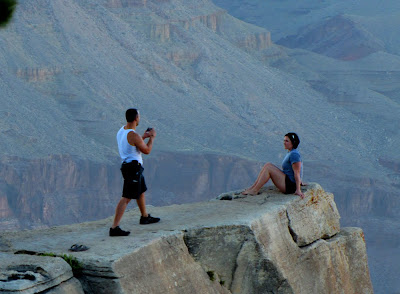 Image: Pushing the boundaries of sense and safety this couple climb onto an exposed rocky outcrop looking for the perfect photo op
There is much to do during a visit to the apart from stand on the rim for a photo opportunity. You could hike all or part of the 13 mile Rim Trail that takes you past many spectacular viewing canyon points. You could join the mule riders for the full day journey to the canyon floor. However, you will need to book up to a year in advance if you want to ride the mule train. If you can’t wait that long, there is a year round program of exhibits and educational programs including daily lectures and films about the geological history of the Canyon and the Colorado River. Visitors can also choose from a variety of Park Service-sponsored walks and talks to enhance their Canyon experience. The visitor's center also hosts programs that focus on endangered wildlife in the Canyon and preservation of the Canyon's historical and natural resources. Finally, various other walks and talks hosted by the Park Service are listed in the park newspaper, The Guide, available at the entrance station, and at other locations.

It is almost impossible to pick a favourite moment out of all the great experiences I had during American trip. While tends to overwhelm the senses, the overwhelms the soul and should be on everyone’s ‘bucket list’ – you know, that list of things you’ve always wanted to do before you ‘kick the bucket’!

Again, let me reiterate that two nights and a day and a half are nowhere near enough to fully take in the . Instead of crossing the canyon off my list of places to visit, I have left it firmly in place since I have every intention of returning for a longer, more appreciative stay.
… 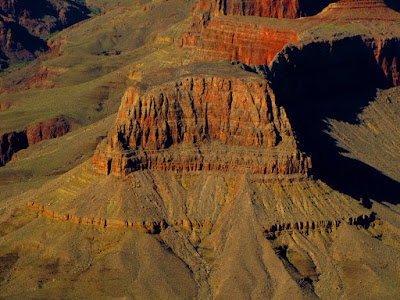 *John Muir ( – ) was a Scottish-born American naturalist, author, and early advocate of preservation of wilderness in the . Read more here…