All Aboard the World’s Largest Zeppelin! 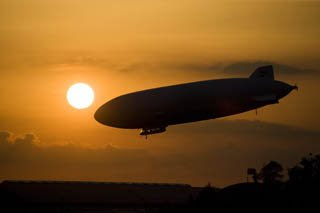 Now this sounds like a real buzz – watching fireworks light the Fourth of July night sky in , while soaring 1000 feet above the aboard the Airship Ventures Zeppelin .

Returning to the skies after a sold-out engagement in May, will offer flight-seeing tours above from .

The highlight of ’s return trip to the skies will be a special two-hour Independence Day fireworks flight that takes advantage of the Zeppelin’s 360-degree panoramas to offer passengers stunning views of fireworks shows up and down the coastline. The fireworks flight is one of many tours offered during the Zeppelin’s six-day excursion to , which also include one- and two-hour flightseeing tours and private charters.

Flightseeing experiences offer magnificent views of landmarks, such as the historic Queen Mary, , the Sunset Strip, the sign, as well as sweeping vistas of the from to .

For those seeking the ultimate Zeppelin experience, tours are available on the transit flights between and the San Francisco Bay Area. Soaring above the California Coastline and , these 8-hour cruises follow Highway 1 on July 1st (southbound), and July 8 (northbound) as the Zeppelin travels to and from from her home base at Moffett Field near .

One- and two-hour flightseeing tours booked before , will be eligible for the company’s “buy one flightseeing ticket, save 50% on the second,” promotional pricing (excluding the Fourth of July Fireworks Flight). Passengers on every flight will receive a certificate redeemable for a buy-one-get-one free general admission to the Queen Mary, good through .

At 246 feet in length, Airship Ventures’ is the world’s largest airship—15 feet longer than a Boeing 747, and dwarfing the largest blimp by more than 50 feet. One of only three Zeppelins currently operating in the world, offers passengers spectacular 360-degree views of the sights on flight-seeing tours above the , , and .

Founded in 2007 in California, Airship Ventures, Inc., operates the only passenger airship operation in the , featuring “,” the world’s largest airship. The Zeppelin’s spacious cabin comfortably accommodates one pilot, one flight attendant, and 12 passengers with luxury features including oversized panoramic windows, an onboard restroom with window, and a 180-degree rear observation window and “love seat” that wraps the entire aft of the cabin. Using the inert gas helium for lift, and vectored thrust engines for flight, Zeppelin NTs have been flying in Germany and Japan since 1997 with an unparalleled safety record.