Oh, dear. How could Apple get it so wrong? The problems with Apple’s new Maps app just won’t go away. In fact they seem to just go from bad to worse. Just today, Australian police have warned travellers using the Apple Maps app to be very careful about relying on the app to get them safely across this vast, and often unforgiving country.

This latest warning came after a number of travellers got totally lost on cross-country road trips due to the poor directions provided by the Apple Maps application.

A case in point: anyone travelling to the regional Victorian city of Mildura could end up miles from their destination if they use Apple Maps, as the screenshot below indicates. For both this, and the following Google Maps image, I sought directions from my home in Adelaide to Mildura.

Mildura is shown here as being located somewhere in the middle of either an unnamed National Park, or in the Pink Lakes Conservation Reserve. It isn’t. As it happens, Route 3 in the image above is at least heading in the right direction (for most of the way), as can be seen in this next Google Maps screenshot.

As can be seen, Apple Maps puts unsuspecting travellers smack dab in the middle of the now correctly named, Murray Sunset National Park. Google Maps also provide a lot more information including numerous highways, the names of country towns, and physical features in the landscape. Of course, as one zooms in to Google Maps, more and more useful information is revealed.

Hopefully, in the above example, people getting lost using the Apple Maps app should be able to find their way out of the National Park without too much trouble – providing other problems (lack of fuel, vehicle breakdown, etc) doesn’t stop them in their tracks. But as I’ve already said, Australia is a vast country, and the landscape, climate, and other factors have combined to trap unsuspecting visitors and locals on isolated roads, bush tracks, and even highways far from help, often leading to the death of more than one lost traveller.

The message the police issued today was clear –travellers embarking on long road trips this summer, should not rely only on the Apple Maps application. They should use a good highway map or atlas, and pay attention to highway signage.
Posted by Jim Lesses at 12:16 PM No comments: 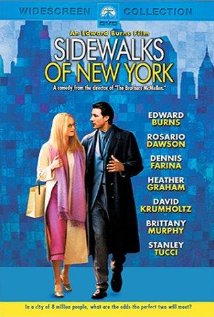 Last night (for the fifth or sixth time), I watched Sidewalks of New York, the delightful ensemble piece put together by the writer/actor/director, Edward Burns. Released in 2001, and written and directed by Ed Burns, the film is another take on the themes and subject matter covered so well in Sex And The City. However, in Sidewalks Burns is able to seamlessly weave the lives of a number of New York couples into a contemporary examination of the morés and beliefs surrounding sex and relationships in modern society.

The tag line for the film reads: In a city of 8 million people, what are the odds the perfect two will meet? And if the film is anything to go by, the odds are reasonably good.

The plot (thanks to John Reeves and the Internet Movie DataBase) can be summarized thus:

Six New Yorkers have an interrelated series of relationships. TV producer Tommy [Ed Burns], who's just broken up with his girlfriend, has a short relationship with commitment-phobe Maria [Rosario Dawson], who he meets in a video store, and also hooks up with married real-estate agent Annie [Heather Graham], who he meets while apartment hunting. Annie is open to a relationship because her husband, Griffin [Stanley Tucci], is cheating on her, which she slowly comes to realize through talking to her friend/co-worker who's gone through the same thing. Griffin, a 39-year-old dentist, is cheating with 19-year-old waitress Ashley [Brittany Murphy], who he picked up in a park; she realizes she can do better when Ben [David Krumholtz], a hotel doorman and aspiring musician, tries to pick her up, in a belated attempt to recover from his divorce a year ago from schoolteacher Maria (the same Maria from the video store).

I love the naturalistic performances that each of the actors brings to the film, especially that of the late Brittany Murphy. She brings so much vulnerability to her role as the 19 year old Ashley, and this performance (and subsequent film roles), only highlight how much the film world lost with her death on December 20, 2009.

The other key ‘actor’ in this film is New York City itself. Having been to New York on several occasions, I loved being able to relive some of my visits by playing ‘spot the location’, as the film progressed.

Sidewalks of New York was filmed mostly around the Lower East Side and the East Village, with key scenes set in Katz’s Delicatessen on East Houston Street; the Housing Works Bookstore Café on Crosby Street; the entrance to the Prince Street subway station; and the now long gone Stingy Lulu’s luncheonette. Another scene takes place in front of the Naumberg Bandshell in Central Park. However, I have not been able to locate the video store (assuming it is still open) in which two important scenes are set. And then of course, there are the numerous faux interviews that take place on the sidewalks of New York City.

The film also offers a poignant reminder of what New York City lost on September 11, 2001, as we glimpse the twin towers of the World Trade Center in the background of numerous scenes. Apparently, the original film poster, which showed the pre-9/11 New York skyline, was pulled after the terrorist attacks.

If have yet to see Sidewalks Of New York head down to your local video/DVD store, or download it from NetFlix or wherever, and take a look at it. I hope you love it as much as I do. 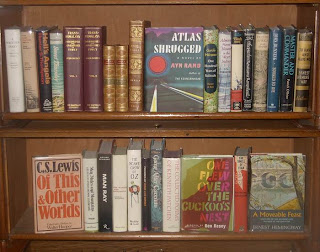 Is it possible for me to motivate myself to start writing again for this blog? I seem to have lost all enthusiasm for the task, but have instead rediscovered my love of reading. Like most book lovers, I have more than one book under way at any one time.

As of this moment, I am part way through the eBook version of Rolling Stone Keith Richards’ autobiography, Life. My current toilet reader (everyone has a toilet reader, don’t they?) is The Little Prince, by Antoine de Saint-Exupéry. And finally I am also reading Eric Moffatt’s 1983 collection of essays examining aspects of American culture: Blood On The Nash Ambassador.

In the past month or so since my return from travelling, I have completed the first two volumes of Robert Green Ingersoll’s Works of Robert G. Ingersoll (of which there are twelve volumes). These are available as free eBook downloads via the Gutenberg website. I have also read Neil Young’s Waging Heavy Peace; Jim Rasenberger’s High Steel; and Thunderstruck, by Eric Larson – all in their eBook versions. And finally, I finished reading The Alienist, by Caleb Carr, a book I started reading before I left for my trip at the end of July. Oh, that reminds me – I am also about half way through Edward Rutherford’s work of historical fiction, New York, another eBook begun back in July.

And they are just the books I have read or am currently reading. If I add to these a growing list of online sites I monitor on a daily basis: New York Magazine; The Huffington Post; Daytonian In Manhattan; amNY; and numerous others, then quite frankly, I really have not allowed myself time to write anything on a regular basis for this blog. And yet…

And yet, here I am, taking time out from all the reading to write this. So maybe the fire has not completely gone out. Something keeps drawing me back to the blog, but that has not been enough to get me to sit down and write. And yet…

To my amazement, the visitor numbers to The Compleat Traveller continue to rise, and despite my tardiness, those numbers have topped one hundred thousand visits, which leaves me gob smacked. I am left to assume that visitors are searching for information that continues to draw them to the site, and hopefully, the information and entries they find here continue to be relevant months after I have written them. Hopefully.

Anyway, enough of this pontificating and soul searching. I am still here. Still writing (if this post is any indication), and still waiting for the Muse to return from her extended break to inspire and motivate me again to write. In the mean time, I have a pile of books to attend to.

Posted by Jim Lesses at 7:02 PM No comments: