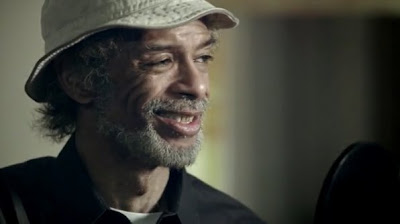 Finally, searching for Gil Scott-Heron on YouTube will reveal a host of clips, official and unofficial, showcasing the music and poetry of this unique artist.
Posted by Jim Lesses at 2:34 AM 7 comments: 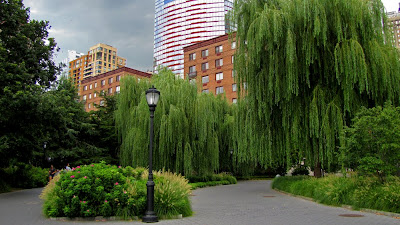 Image: Battery Park Gardens: a city oasis
If there is one thing I’ve noticed on this trip that did not make a major impression on me during my 2008 trip, it is the way New Yorkers love their parks. This could be because back then I visited during early spring, and the weather was not exactly conducive to the type of activities that one sees over the summer months.

I have no idea of the number of parks across New York City. Even the official government parks website states: “This is not an entirely exhaustive list of Park Properties. If you see something missing or have a suggestion of how we can improve this list, please contact us.”

Certainly thousands of parks must be listed on the site. I did make a half-hearted attempt to count the actual number, but decided I had better things to do with my life and my limited time in the city! 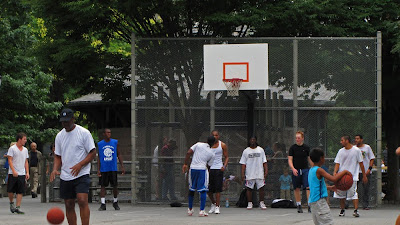 I think it is fair to say that New York City parks are, in many ways, at the heart of community life in this amazing metropolis. 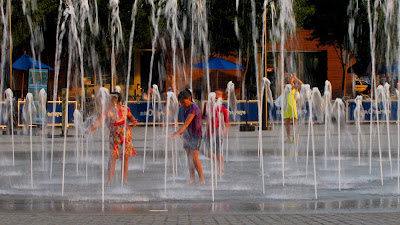 Image: Park water features are very popular, especially in summer
New York parks are filled with a multitude of colourful plants and flowers; trees of all shapes, colours and sizes; large lakes and water features (which might double as ice-skating rinks during winter months); huge swathes of well kept lawn areas and good walking and bicycle paths; and numerous statutes and examples of public art. Some have extensive botanic gardens and zoos; others house world famous museums and galleries; and all are well patronized and filled with activity, often late into the evening.

Of course you will also find restaurants, cafés, and small mobile food and drink stalls throughout the parks, along with the ubiquitous mobile ice-cream vendors that seem to appear in every city over summer. 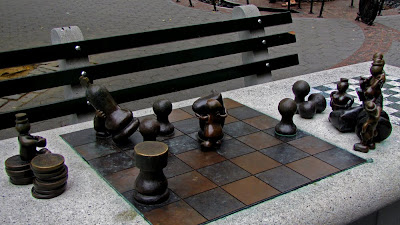 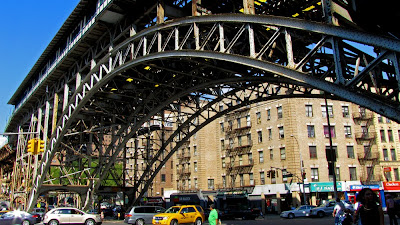 Image: Elevated platform on the corner of Broadway and 125th Street
As anyone who goes to the movies regularly, or who watches even a modest amount of television will tell you – New York City is a favourite location for movie directors everywhere. In America, Los Angeles is the only other city that probably comes close to New York – and maybe even surpasses it as a movie location. I’m musing about this today, because yesterday, I happened upon two separate film locations during my rambles around Manhattan.

I spotted the first movie shoot as a rode the M4 bus from Washington Heights down to Harlem. I was bussing it because I knew the M4 passed alongside a massive elevated railway platform for the 1 (One) Train which surfaces from its subterranean depths between 135th Street and 122nd Street (see image above). By the time the train passes over 125th Street it is probably six floors above street level, and I wanted to take some photographs of the massive steel structure towering high over pedestrians, motor vehicles and shops on the street. 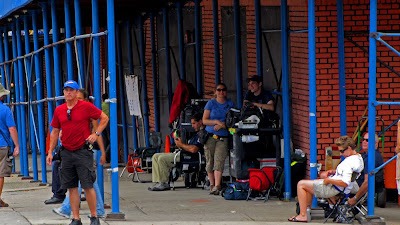 Image: Film crew playing the ‘waiting game’ on location in New York City
Folks, if you want to know why modern movies cost 200 or 300 million dollars to make, it’s because dozens of crew members, and acting ‘extras’ literally sit around for hour after hour waiting for the shot to be set up, the sun to come out (or go behind a cloud), the rain to stop, or any one of a thousand other reasons before the director calls, “Action”.

I stood around for over an hour waiting to see what would take place, and just when I thought I might as well move on, I noticed a buzz of activity as walkie-talkie’s crackled into life, and things began to happen. The chase car moved into place. A stunt man mounted his bicycle, and a dozen or so vehicles which had been parked by the curb, suddenly roared into life; swung into position; paused for a moment like Formula 1 cars on a starting grid; and as the director called ‘Action’ the chase scene got underway – and was over before I had time to focus my camera!

I hate to think how many thousands of dollars were expended during the 90 minutes I had been hanging around on the edge of the shoot, let alone during the hours the crew must have been on location. I’m sure the chase scene will look great in the final movie, but quite frankly, standing around watching movies being made is pretty dull when all is said and done. 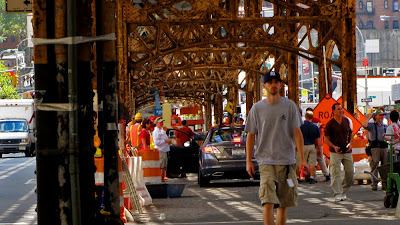 Image: Film crew setting up under elevated railway on Broadway, New York City
Of course you want to know what the movie is called, and who the lead actors are. All the crew woman I spoke to told me was that it was called Premium Rush. However, a 15 second search on the Internet Movie Database provided the following information: Directed by David Koepp, Premium Rush is described as "An action story set in New York City, where a bike messenger picks up a package at Columbia University and subsequently catches the attention of a dirty cop."

Aha. That explains the 20 second chase sequence between a camera car and the stunt man on the bicycle. 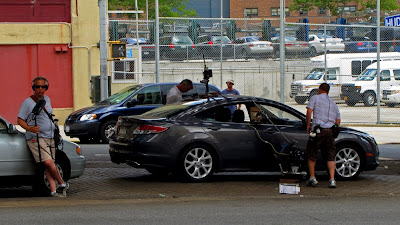 Just for the record, the film stars Joseph Gordon-Levitt (currently appearing with Leonardo DiCaprio in Inception), and Jamie Chung (who despite the masculine sounding name is female, and who seems to have done mostly television but is now branching out into feature length movies). Maybe it's just me, but from time to time Gordon-Levitt bears an uncanny resemblance to the late Heath Ledger!

Later in the day, I was heading towards the South Street Seaport and saw three or four film company semi-trailers parked off Broad Street, with a couple of crew members setting up a lighting rig for an evening shoot.

As usual, you can find information online about daily shooting schedules and locations for movies and television shows being filmed around New York. The best site for I have found for that is the On Location Vacations website here…

Posted by Jim Lesses at 2:11 AM No comments: