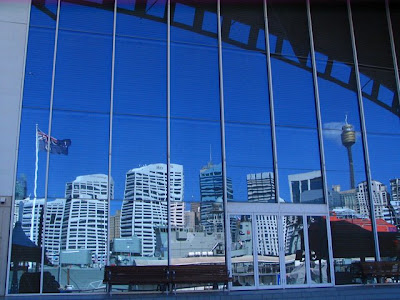 ~ I was not expecting the delightful shock I got as the train from Petersham slowed into Circular Quay.
The first thing I saw was the Sydney Opera House, followed quickly by the sweep of the Harbour spread out in all its glory, and then my first view of the Harbour Bridge.

The designers of the Circular Quay station complex clearly had one eye focused on the view too, since parts of the platform were open to the elements, and afforded good lines of sight to the Bridge, Harbour and Opera House.

The pulsing thrum of a didgeridoo, accompanied by a pounding techno beat drifted up from the street below. Before I left the station, I took the obligatory photographs of the view but left the Opera House and Bridge for later, since I couldn’t quite get perfect shots of either.

Down on the street, I slowly walked around to the Opera House, pausing to watch the didgeridoo player; the human statue dressed as an Anzac digger, and other sundry buskers. At the foot of the sweeping steps leading up to the entrance of the Opera House, I stopped to admire the grand vision of Jorn Utzon, the Danish architect who designed one of Australia’s true iconic buildings.

Up close, the building isn’t as imposing as you might expect, and yet there is something unique and beautiful about the Opera House’s form and design that constantly delights the eye. Certainly, the location – on one of the most stunning natural harbours in the world – plays a big part in its ongoing appeal.

I’m sure too, its accessibility and visibility plays a huge part in that appeal. After all, both the Bridge and the Opera House are clearly visible from so much of the Harbour, that both might even be in danger of being taken for granted, despite their status as uniquely Australian icons.

Despite the grey skies and the occasional rain shower, I kept my camera close at hand as I tried to capture the Opera House and Harbour Bridge at unusual angles, or as unconventionally as I could, while a constant flow of ferries, water taxis, cruise boats, and other water craft came and went from Circular Quay.

I never thought I’d say this, but I think the area around Circular Quay is as vibrant, exciting, and involving as any similar part of New York City (where I spent two months last year).

New York of course, has many other attractions to delight and excite, but they tend to be spread right across Manhattan. Sydney on the other hand, has concentrated some of its premier attractions and views in a relatively central area, and you can easily spend a full day in and around Circular Quay and still not see all that the area has to offer.

I’m hoping for at least several ‘perfect’ days during the rest of my Sydney visit. On one of these I will venture out onto the water via the many ferries that crisscross the Harbour, and try and capture the city skyline, Harbour Bridge and Opera House from one of these off shore platforms.
Until then, I will have just have to keep dodging the rain showers, and be patient.