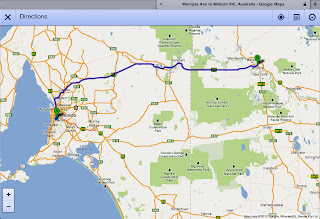 The story so far… In two previous posts, I wrote about travelling across America with my iPad 2, and listed my favourite apps in terms of their usefulness in part one of this series. Now read on…

Maps (the original Google app)
Ah, maps. I wrote recently about just one of the problems facing the new Apple Maps app, and I won’t repeat myself here. However, it is pretty much impossible to travel anywhere, let alone on an extended journey, and not refer to a map of some type. Thankfully, I was able to use Google Maps throughout my trip before the app was dropped from the latest iOS6 upgrade, a fact I am very grateful for.

Since I was travelling without a car, and by necessity had to make I use of public transport in the cities I visited, Google Maps was indispensable for pointing me in the right direction, and for working out which buses or subway routes would get me to my destination in the shortest possible time. And because I didn’t have a permanent WiFi connection, one of the iPad functions I made regular use of, was the ability to capture screen shots (when I was online), of street maps and any city neighbourhoods I wanted to explore. These were stored in folders for offline referral. Once I moved on from the city I was visiting, I would delete the maps to make space for new ones.

TripAdvisor
The TripAdvisor app provides access to more than 75 million reviews and opinions by travellers in every corner of the planet. TripAdvisor makes it easy to find and compare car hire and airfares, hotels and restaurants, and learn about galleries, museums, and other attractions wherever you might be visiting. I have added my own modest hotel reviews, and reviews for some of the places I visited, but there are many more I can – and should – add. The app is ideal for searching out last minute places to visit while on the road, but of course, one should have conducted this type of research well before arrival in some far-flung location.

Choice Hotels
I stayed in eight hotels during my last trip, but it wasn’t until I was at my third hotel that I remembered that on a previous round the world trip in 2010, I had signed up with the Choice Hotels group of companies to try and take advantage of their rewards program.

iPad in hand, I checked the apps store and found the Choice Hotels application which made searching for, and comparing the more than 6,000 hotels within the group very easy and convenient.

I spent almost five weeks in various Choice Hotels racking up more than 20,000 reward points – which I have yet to redeem – and for which I will eventually add reviews on this blog. I loved having the ability to filter and sort hotel search results by price and location (see screenshot); book hotels from within the app, and even cancel reservations if needed. You can also view hotel details, amenities and photo galleries, and find various points of interests in map view along with hotel search results

Facebook
I think it is fair to say that Facebook has become the de facto website for keeping in touch with friends and family members at home, or elsewhere in the world, whether or not you are travelling. The iPad app is constantly being improved and is easy to use. Uploading trip photographs and adding messages is a breeze, and as much as I have ongoing concerns about privacy issues with Facebook, it is still probably the best way (apart from mass emailings) to keep in touch with a large number of people with the least amount of effort.

Skype
Millions of people around the world have signed on to Skype, the company that has helped revolutionize the online phone business. The Skype iPad app allows users to make free voice and video calls to anyone else on Skype – providing both callers have Skype accounts. Even calling family or friends via Skype’s pre-paid service is much cheaper than using your mobile/cell phone company’s global roaming service. Or global rorting, as I like to call it. Just add a few dollars of Skype Credit to your account and away you go.

World Clock
I stopped wearing a watch when I first bought my by now ancient iPhone 3GS. Since the phone was rarely out of my hands, I made regular use of the device’s Clock app, thereby allowing me to leave my watch unused. For some unexplainable reason, Apple chose not to include the Clock app on the new iPad’s (a mistake that has now been rectified), which of course gave app designers around the world a chance to fill the gap with clock apps of their own design. World Clock has become one of the most popular of these apps, and I found it to be perfect for keeping tabs on time shifts as I travelled across America, and for keeping in touch with family members in Greece and Australia. Now that I am back in Adelaide, the app is just as useful for checking the time in Tucson (Arizona,) New York City, Athens (Greece), and elsewhere.

And last, but by no means least. Since All work and no play, makes Jack (or Jim) a dull boy, my game of choice was, and still remains Backgammon. I have a love/hate relationship with this game: I love it when I win, and I hate it when I lose. Either way, it is endlessly challenging, and the version I have seems to be one of the better Backgammon apps around, although it does have its idiosyncrasies.

I also had a bunch of apps which many travel sites often recommend. These included TripIt, Evernote, Priceline, Urbanspoon and Yelp. However, I made no use at all of these apps during my travels.
Posted by Jim Lesses at 12:01 PM