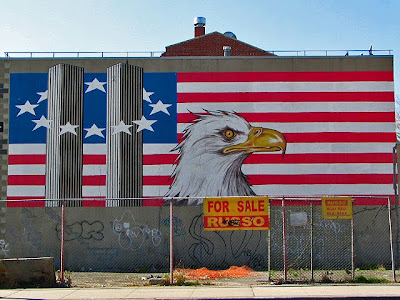 I encountered this massive mural on the wall of a building on the corner of and , in the suburb of Red Hook (close to the , station for the ‘F’ and ‘G’ trains).

The artist is Scott LoBaido, who has made a name for himself by painting huge murals featuring the American flag on buildings in every state. I should point out that America For Sale is the title I gave the photograph, it is not (as far as I am aware) Scott’s title for his mural. In fact, after looking at his website, I think it is fair to say that Scott is a flag waving patriot – and unashamedly so. So I’m not sure what he would make of my title for his mural.

However, while I was setting up to take photographs of the mural, a man who happened to be passing stopped to tell me how appropriate the juxtaposition between the ‘For Sale’ sign and the mural on the wall was. Of course, it was exactly this juxtaposition that had caught my attention in the first place.

‘ is being sold off to the Chinese’, he loudly informed me, clearly not happy with the idea. All I could do with empathise and tell him that the same thing had been happening in for years. I’m not sure he left any happier, but maybe he found some comfort knowing others were suffering the same fate!

Photograph: For , by Jim Lesses