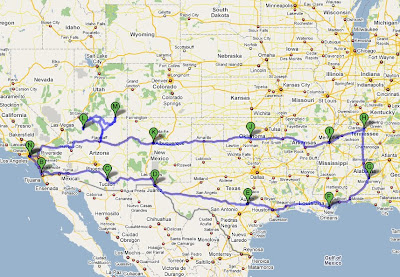 Click on image to enlarge
At the beginning of June (in The Countdown Begins), I wrote about my nascent plans for my next major overseas trip planned for 2010. Back then I’d been home in eight months following my last trip, and I was counting down the ten months before my expected departure.

Now here I am, two months later and find those numbers have been reversed. I’m now ten months back with eight months before I head off again around the end of March.

My plans are still no clearer in my mind, with respect to what I want to do, and where I want to go, other than I want to undertake a major road trip across the , and once again end up in for an extended stay. is the ideal place as the final destination of my travels because I have two sisters living there, and the free use of the original family home on the .

Regular readers of this blog will know I have been conducting lots of research in the form of reading (and reviewing) books – old and new – in preparation for my trip. I’m a great believer in trying to get a broad understanding of the cities and the landscape of countries I am travelling through, so I can better enjoy the experience. Knowing something about the history, culture, and lives of the people I might meet helps build insight and awareness into the overall travel experience. The more I research and learn, the more I am able to see the world through the eyes of the locals and modify or drop my own preconceived ideas of how I think they should or should not be living or behaving.

And so to . So far my thoughts are thus: I will probably fly into . I will then catch up with various relatives on the west coast (; , and elsewhere).

I will then embark on my road trip. But for how long and to where exactly? This is currently my great dilemma. The is so vast and varied that there is far too much to see and do in one road trip no matter how extended it may be. My plans have ranged from a circumnavigation of the continental United States that would involve driving some ten to twelve thousand kilometres (assuming Google has done the maths correctly), to much shorter drives of four to six thousand kilometres.

I am currently more inclined to aim for a shorter drive where I can spend more time savouring the journey and the destinations along the way, but I’m still a long way from deciding where my road will lead me.

My latest Google mapping exercise has me plotting a route from Los Angeles across the southern states as far east as Alabama, and then up to Nashville before driving back to L.A. along Route 66 (see map illustrating this entry). However, at around 5,300 miles (or 8,500 kilometres), even this road trip looks like hard work, and vacations should not be hard work. They should be relaxing and fun, and stimulating and exciting.

Not that I am baulking at the distances involved – even though I will probably be on my own. One thing Australian drivers learn to do early – whether they like driving or not – is drive long distances. We know that short of flying between major capital cities (or taking a train or coach), the most convenient way to get anywhere is by car. And since we hate to be without a car at our ultimate destination, driving our own vehicles to our final destination is almost always our preferred option.

Anyway, I know I will return to this theme several more times before March, so bear with me, and if you have any ideas or suggestions, please pass on your tips via the Comments box below.