My 52-Book-Year: The Ways of White Folks 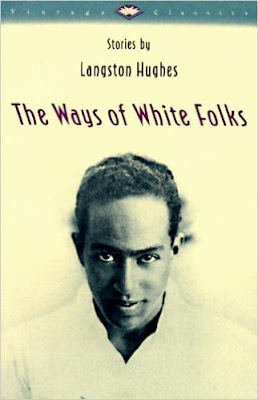 Back in February, in a post titled, Writers From Life’s Other Side I wrote about how over the past few years I have been seeking out writers that have slipped under my radar, despite the accolades they have won for their writing. One of those writer’s is the great African-American author, Langston Hughes.

I have been aware of Langston Hughes for a long time—years in fact—but I had never read any of his poetry, plays, novels or short stories until I read The Ways Of White Folks.

James Mercer Langston Hughes (February 1, 1902 – May 22, 1967) was an American poet, social activist, novelist, playwright, and columnist from Joplin, Missouri. He was one of the earliest innovators of the then-new literary art form called jazz poetry. Hughes is best known as a leader of the Harlem Renaissance in New York City. He famously wrote about the period that "the negro was in vogue", which was later paraphrased as "when Harlem was in vogue”.

The Ways of White Folks is a collection of short stories first published by Hughes in 1934. Hughes wrote the book during a year he spent living in Carmel, California. Arnold Rampersad, in A Centennial Tribute to Langston Hughes writes that the collection is, “marked by pessimism about race relations, as well as a sardonic realism or, contextually: humorous racism,” and adds that the collection is among Hughes’ best known works.

The Ways of White Folks consists of 14 short stories, including "Cora Unashamed”, “Home”, “Passing”, and “Father and Son.” The fourteen stories cover the gamut of white/black relationships, and Hughes is not shy about using the 'N' word—that is nigger—often, and in all its shades of meaning.

The collection opens with "Cora Unashamed" — described by David Herbert Donald (in a 1996 review for the New York Times), as “…a brilliantly realized portrait of an isolated black woman in a small Middle Western town, who stoically survives her own sorrows but in the end lashes out against the hypocrisy of the whites who employ her.”

Two of the stories, “Home”, and “Father and Son”, end with lynchings. In “Home,” Roy Williams, a brilliant young violinist returns to Hopkinsville, the small provincial Missouri town he left seven or eight years earlier to pursue a successful concert career in Europe (during the years between the two world wars). It is not long before Roy is confronted with the racism he had left behind years earlier:

“An uppty nigger,” said the white loafers when they saw him standing, slim and elegant, on the station platform in the September sunlight, surrounded by his bags with the bright stickers. Roy had got off a Pullman—something unusual for a Negro in those parts.“God damn!” said one of the white loafers.

As he departs the station platform Roy hears someone mutter, “Nigger.” His skin burned. For the first time in half a dozen years he felt his colour. He was home.”

Over a few short weeks, the resentment from the ‘loafers’ as Hughes calls them, continues to build until their animosity and envy boils over into uncontrolled rage at this black man, who had the temerity to escape the confines of his home town and travel to Europe, where he played the music of “Brahms and Beethoven, Bach and Cèsar Franck” in the great concert halls of Paris and Berlin.

When Miss Reese, “An old maid musicianer at the all white high school,” invites him to perform for her students, her well-meaning invitation only serves to stoke the anger and resentment from many in the town.

The students went home that afternoon and told their parents that a dressed-up nigger had come to school with a violin and played a lot of funny pieces nobody but Miss Reese liked. They went on to say that Miss Reese had grinned all over herself and cried, “Wonderful!” And had even bowed to the nigger when he went out!

The story ends when Roy takes a late night walk through the town centre, and is set upon by a mob who beat and kick him mercilessly. The final paragraph is both brutal and poetic:

The little Negro whose name was Roy Williams began to choke on the blood in his mouth. And the roar of their voices and the scuff of the feet were split by the moonlight into a thousand notes like a Beethoven sonata. And when the white folks left his brown body, stark naked, strung from a tree at the edge of the town, it hung there all night, like a violin for the wind to play.

Clearly, Hughes pulls no punches in his depictions of 'white folks' and their foibles, fears, hates, contradictions, and murderous natures. To be black in America, when Hughes wrote these stories, was to live in fear that whites, well meaning and otherwise, had virtually free rein to do and say what they wanted when it came to the lives of the American negro in the years following the Civil War. The truly horrifying thing is realizing that today, in vast swathes of America, little seems to have changed.

All of the stories in this collection are brilliantly realized, and each one examines an aspect of the droll, horrifying, humorous, bizarre, and often mysterious—ways of white folks. The stories are steeped in the violence, and confusion of Depression Era America, and the collection immediately drew me into its orbit of small town Southern life, and big city mysteries.

On May 22, 1967, Hughes died in New York City at the age of 65 from complications after abdominal surgery related to prostate cancer. His ashes are interred beneath a floor medallion in the middle of the foyer in the Schomburg Center for Research in Black Culture in Harlem. It is the entrance to an auditorium named for him. The design on the floor is an African cosmogram entitled Rivers. Within the center of the cosmogram is the line: "My soul has grown deep like the rivers,” from his poem The Negro Speaks of Rivers, which is reproduced here:

I bathed in the Euphrates when dawns were young
I built my hut near the Congo and it lulled me to sleep.
I looked upon the Nile and raised the pyramids above it.
I heard the singing of the Mississippi when Abe Lincoln
went down to New Orleans, and I've seen its muddy
bosom turn all golden in the sunset

My soul has grown deep like the rivers.
~ Langston Hughes

Langston Hughes is surely a writer I need to read more of.

More Information about Langston Hughes
On Wikipedia...
At Poets Org… and Poem Hunter…
Schomburg Center for Research in Black Culture…
Posted by Jim Lesses at 9:13 AM