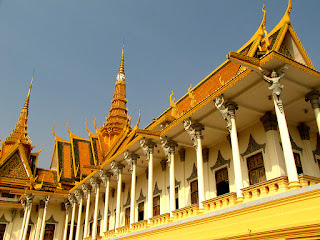 I visited Cambodia early in 2011 and during my stop in the national capital, Phnom Penh, I paid a visit to the complex housing the Royal Palace and the magnificent ‘Silver Pagoda’ which is located next to the Royal Palace. 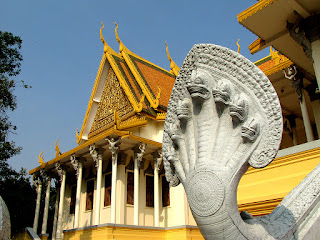 Gleaming in gold, the Royal Palace is one of Phnom Penh's most splendid architectural achievements. It is home to His Majesty King Norodom Sihanouk and Her Majesty Queen Norodom Monineath. The palace was built in 1866 by His Majesty Prince Bat Norodom, the great grandfather to the current King. The Royal Palace is built on the site of the old town. This site was especially chosen by a Commission of Royal Ministers and Astrologers because it had great geographical significance in relation to the King, who was regarded as a direct descendant of the gods. Credit: Tourism Cambodia…

Among the images in the video are the Stupa of His Majesty King Suramarit and Her Majesty Queen Kossomak. A stupa (Sanskrit for "heap") is a mound-like or hemispherical structure containing "relics", typically the remains of Buddhist monks or nuns, used as a place of meditation. Most of the images are of the ‘Silver Pagoda’ and some of the monuments surrounding the building. 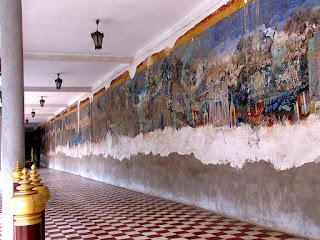 The 'Silver Pagoda' sits next to the Royal Palace. The Pagoda's proper name is Wat Preah Keo Morokat, which means 'The Temple of the Emerald Buddha.' It has received the common name 'Silver Pagoda' after the solid silver floor tiles that adorn the temple building. The pagoda compound as a whole contains several structures and gardens, the primary building being the temple Wat Preah Keo Morokat and other structures including a library, various stupas, shrines, monuments, minor buildings and the galleries of the Reamker.
Credit: Canby Publications…

The brief video footage shows one of the wonderful Ramayana Frescoes that line the interior of the pagoda compound walls. The murals were painted in 1903-1904 by a team of students working under the direction of artist Vichitre Chea and architect Oknha Tep Nimit Thneak. Over the 100+ years since they were first painted, some sections of the frescoes have become badly damaged and worn. While I was there, a small team of artists were at work on the frescoes conducting the painstaking work of restoring one of the longest murals.