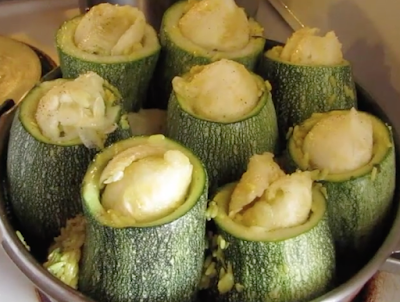 Another in my “Irene’s Kitchen” series featuring the Greek Island cooking of my sister, Irene Gevezes. This time Irene is cooking Stuffed Zucchini, a very simple vegetarian dish.

Finding large zucchini (also referred to in some countries as Courgette, or Squash), of the size seen in this video — which came from Irene’s homegrown plants — may be quite difficult in modern supermarkets since they tend to favour short, thin fruit under 20 cm (8 in.) in length.

Look for the larger zucchini at weekend farmer’s markets, or better still — grow your own.

Filmed on the Greek island, Ikaria, in 2014. With thanks to Irene Gevezes for her patience, culinary skills, and delightful meals.

You can see more of my videos online via my YouTube channel...
Posted by Jim Lesses at 4:45 PM