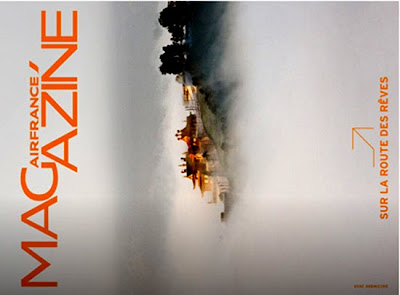 There they are, jammed into the storage pocket located behind every airline passenger seat – generally between the vomit bag and the in-flight shopping catalogue.

I’m talking about in-flight magazines, those relentlessly cheerful, glossy publications produced by the world’s major airlines to keep bored passengers entertained with stories featuring exotic locales, illustrated with stunning sunset shots, and peopled by natives whose only pleasure in life seems to be administering to your every wish and whim.

Take the December 2010 issue of Air Magazine. Come to think of it – following my return to from flying with Air – I did take it. It’s lying open on the table in front of me generating a severe case of buyers remorse (see footnote).

Why is it that in-flight magazines always seem to feature gushing stories about locations you are not flying to? A case in point: the December issue of Air Magazine. I mean, there I am, flying to Paris, one of the most romantic and idealized cities in the world, reading about the incredible , and sun drenched .

? What was I thinking? I could have been sunning myself in the South Pacific for the past two months. Instead, I spent ten days freezing my butt in , and now here I am freezing my ears on the Aegean ! 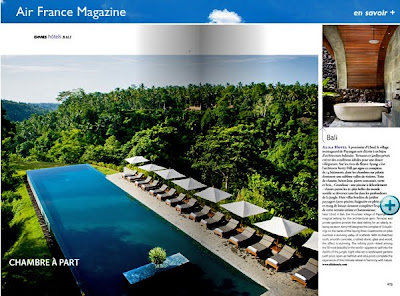 Then there is the article about luxurious accommodations in , and elsewhere which make my 35 euro budget hotel look like a flop house for vagrants.

I looked in vain for a guide to the prices charged by the hotels featured, but none was to be found anywhere – not in the magazine, anyway. Fearing this was a clear case of “If you have to ask the price – you can’t afford it,” I took a deep breath and headed online.

I was right. I couldn’t afford it. Even at the special internet rate of “from USD $245++” per night I was not going to be staying at the Alila Ubud Resort in anytime soon. Clearly, my copy of the in-flight magazine had inadvertently strayed from First Class down to Economy.

How else do you account for the high priced advertisements for higher priced luxury goods and products, modeled by even higher priced actors. Surely Penélope Cruz, Charlize Theron, and Leonardo DiCaprio are not so strapped for cash that they have to tout for watch makers and perfume companies. Surely! Leonardo – say it isn’t so.

The next time I take an airline flight I’m going to carry a good book to read and leave the in-flight magazine where it belongs, jammed between the in-flight shopping guide and the vomit bag. 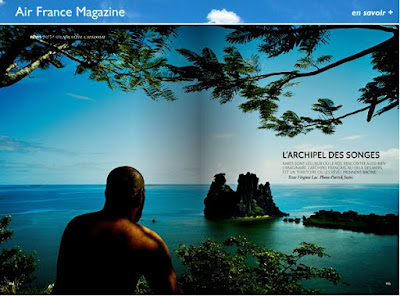 Footnote: Buyer's remorse is the sense of regret some people have after purchasing big-ticket items such as a car or house [or in my case, I trip to ]. It may stem from a sense of not wishing to be wrong, of guilt over extravagance, or of suspecting you have been "snowed" by a salesperson. [Source: Wikipedia...]