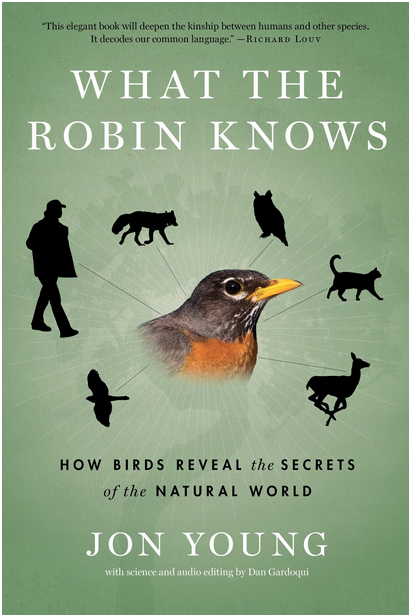 I was reflecting on the nature of serendipity today, and thought I might as well write about it here. But first here’s one dictionary explanation for the word serendipitous:

serendipitous |ˌsɛr(ə)nˈdɪpɪtəs|
adjective : occurring or discovered by chance in a happy or beneficial way: a serendipitous encounter.

So what sparked this post today? I am about half way through reading What The Robin Knows, by Jon Young. Subtitled, How Birds Reveal the Secrets of The Natural World, the book is a fascinating examination of the many signs and clues that birds use in their everyday lives.

“A lifelong birder, tracker, and naturalist, Jon Young is guided by three basic premises: the robin, junco, and other songbirds know everything important about their environment, be it backyard or forest; by tuning in to their vocalizations and behavior, we can acquire much of this wisdom for our own pleasure and benefit; and the birds’ companion calls and warning alarms are just as important as their songs.” Source: Amazon.com

The internet, is of course a perfect example of serendipity in action. By following hyperlinks, web users are led from page to page and site to site, following links, interests, hunches and clues that often lead users far and wide across the modern web to places they never expected to go. Such was my discovery of Jon Young and his books, of which What The Robin Knows is just one of many.

This morning our wildlife ecologist managed to snap a picture of a rare sighting of a grey fox! The last record of a grey fox sighting in the Presidio was in 2004. The fox scrambled onto some branches along with a raven as a coyote prowled around a bush below. Thanks to Jon Young for the incredible picture!

What? thought I. Jon Young? Surely, this must be the same Jon Young that I am currently reading. I immediately headed over to the Presidio’s website and searched for Young’s name, and sure enough, I discovered that Jon had recently completed a free ‘Bird Language Leaders Workshop’ for the Presidio.

Forget ’six degrees of separation’, sometimes only three or four degrees separate us from each other—if not fewer. It is interesting (and probably futile) to speculate whether I would have paid attention to the image if I had not already been reading Jon Young’s book. Interesting too, to wonder about the coincidences that bring these disparate threads together and connect them in ways that seem totally random and unexpected.

Certainly, if I had not ‘discovered’ the books of Rebecca Solnit a year or so ago, I would never have connected with her via Facebook. And if I had not been browsing through iBooks for titles of interest a few weeks ago, I would never have seen What The Robin Knows or discovered the work of Jon Young. It is even possible, if not likely, that given the constant stream of Facebook updates I might have missed Rebecca Solint’s post if I had not checked my page when I did, and therefore missed the reference to Jon Young, and so on and on, and on.

Coincidence? Serendipity? Chance? Dumb luck? Who knows? But since I am writing about Facebook, birds, and the serendipitous nature of life, I will leave you with a video that also turned up on my Facebook stream this week which features a murmuration of starlings. The video is from Paul Tomlinson and at six minutes in length is quite mesmerising and meditative. Enjoy.